On Thursday of last week, a Florida gun group launched an attack on our state director Luis Valdes and, by extension, on Gun Owners of America.

One pro-gun writer described it as an “attack piece” against GOA. 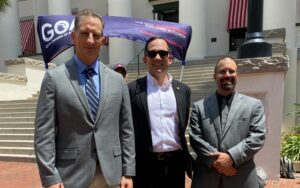 This broadside was then reprinted by a national group, as well as another state gun group in Florida.

GOA has made it a practice not to speak ill of other pro-gun groups, and so I don’t intend to do so here. At the same time, given the coordinated attacks by several groups, it’s necessary that I respond to the false allegations because there are surely many GOA members who have read the articles, and they want to hear our side of the story.

You can read my full response to these accusations at The Truth About Guns.

NOTE: If you haven’t yet read my response at The Truth About Guns, I encourage you to stop reading here, click on the link directly above, and take a moment to read the article before continuing on. It will give you the best overview of the situation.

And make sure to read the comments at the bottom. They are universally supportive of GOA!

As you know, GOA is a no-compromise group, which means that we will never give politicians a pass for compromising — no matter what their party affiliation. GOA has been critical of many Florida legislators for refusing to pass substantive pro-gun bills. And ultimately, we are being attacked for holding accountable one legislator in particular: Rep. Cord Byrd (R).

After The Truth About Guns printed my response, the other author has doubled down and launched a second attack against GOA. If you have questions regarding what this is all about, I encourage you to read my original response to this organization from Saturday, and the second ad hominem “attack piece” against GOA on Sunday. And as you do, here are a few things you should notice between these two articles:

Ultimately, this comes down to a disagreement over how GOA lobbies. Rep. Ron Paul said that, “GOA is the only no-compromise gun lobby.” If you ever wondered what that means, this is one such example.

GOA doesn’t compromise, and we never have during our 40-plus years in operation. And while that drives some politicians crazy, it also upsets some gun owners who are willing to compromise if it means that they can have a “seat at the table.”

So case in point: While the author is a board member of the state group that is attacking GOA, he also writes for a national gun group that, in 2013, was pushing the Manchin-Toomey gun control bill in the wake of the Sandy Hook shooting.

Yes, that’s right. A national gun rights group was pushing the Manchin-Toomey compromise – which was a Universal Background Check-lite bill.

Well, GOA took a different approach in 2013. We opposed ALL gun control that year (as we always do), and we blasted the compromises that some gun rights advocates were pushing.

Rather than taking what legislators give us — and simply tweaking it to make it “not so bad” – we rallied the grassroots with the message: “Oppose all gun control.”

We generated so much grassroots pressure, that Republican Senators who were thinking about supporting gun control-lite, quickly backed away.

Consider this report from Slate: “When Sen. Tom Coburn, an Oklahoma Republican, backed away from bipartisan talks to expand background checks earlier this year, he did so after Gun Owners of America and its members flooded the senator’s office with e-mails and phone calls.”

In the end, GOA’s approach won. And the New York Times even credited GOA with killing Universal Background Checks (UBCs) in 2013.

But notice: Our approach differed from other lobby groups that were trying to broker a compromise on UBCs. Again, their approach can be summed up as getting a “seat at the table” where they can negotiate gun control language that’s “not as bad” as the original.

That’s not how GOA operates. We mobilize YOU — the grassroots — because the millions of gun owners like yourself are the ones best suited to blast the compromisers and rein them back in. Sadly, other groups don’t mobilize the grassroots this way.

The state group which is attacking GOA only sent one legislative alert to its grassroots members this year. Only one! By contrast, GOA put out over 20 alerts into the state within the period of a few months. But what’s ironic is that in the past week, this group has sent double the number of alerts (2) as they have legislative alerts (1) in 2021 – but both alerts in the past week focused on attacking a fellow gun organization.

This has not gone unnoticed by Florida gun owners. On Sunday, in the wake of the second hit piece on GOA, one Floridian posted this on Facebook:

They [the state group] doubled down attacking Luis Valdes and Gun Owners of America-Florida today with a condescending yet entirely emotional ad hominem tirade. Literally the only two emails I’ve received from them in almost two years were to attack other gun groups. Yet they’re nowhere to be found otherwise.

So thank you so much for standing with us. We can’t do what we do without your activism.