Only the Governor Can Resurrect Constitutional Carry

We have one week before the 2021 legislative session adjourns on April 30.

With a Republican Supermajority of 102 lawmakers, you’d think that pro-gun bills would be piling up on Gov. DeSantis’ desk right now.

Well, that isn’t happening, and even worse, they’re trying to pull the wool over our eyes.

The pro-gun bills are stalling — and they’re lying to us as to why they’re stalling.

On April 15, HB 1409 was debated and voted on in the House’s Judiciary Committee. HB 1409 is a state preemption bill introduced by Rep. Cord Byrd (R). It is a bill that GOA fully supports.

The basis of the bill is simple. If a political subdivision of the state passes an ordinance that violates state preemption laws, then a person can seek damages by filing a lawsuit.

The political subdivision cannot repeal or change the ordinance to make the case moot. It is a good and honest bill. We let Rep. Byrd know that we back his bill and that we want to see it passed.

Rep. Byrd’s bill, HB 1409 is on its way to a full floor vote in the House since it passed its final committee thanks to your hard work and effort in contacting lawmakers.

But to be frank with you. We’re a bit upset with Rep. Byrd. Why? Because back on March 17, Rep. Byrd said that, as the chair of the House’s Criminal Justice & Public Safety Subcommittee, he will not bring HB 123 (Constitutional Carry) up for a vote in his committee since it does not have a Senate companion bill.

Yet, Gov. Ron DeSantis’ pet project, the Anti-Riot bill (HB 1) had no Senate companion bill, and yet Rep. Byrd brought it up for a vote in his committee. In fact, Byrd’s committee was the first one that had to pass HB 1. And guess what happened? HB 1 passed Rep. Byrd’s committee and all the other ones in the House and Senate. 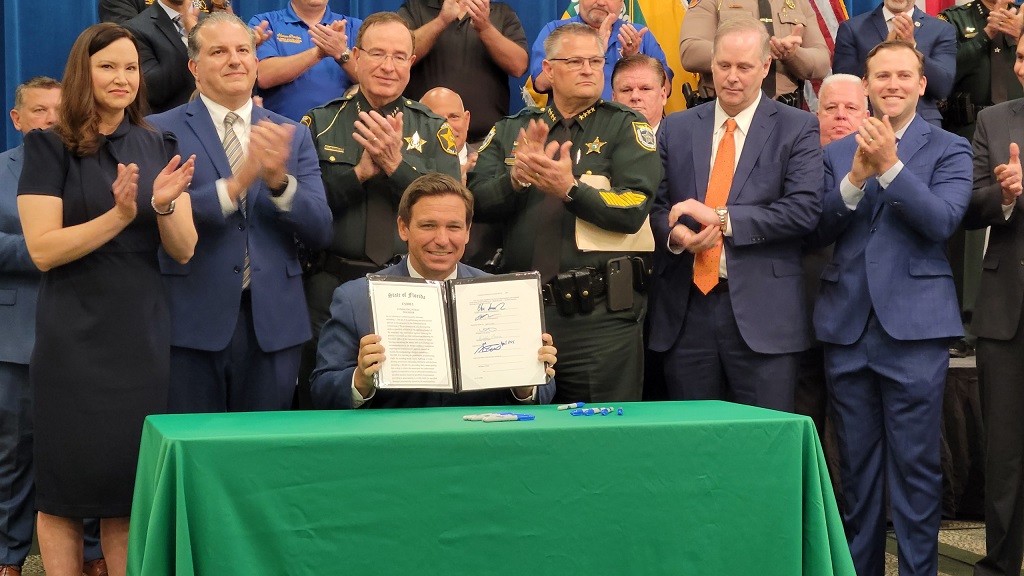 So why the anger?

Simple, we were lied to.

At first, Rep. Byrd stated on February 10 that he might bring up HB 123 at the half way point of the session. When that didn’t happen, I asked him and he gave us the answer of there being no companion bill.

The thing is, no legislation needs a companion bill to move forward!

HB 1 this session showed that, and so did SB 7026 (the Parkland Shooting Gun Control bill) which passed in 2018 by the Republican-controlled legislature and which was signed into law by then Republican Governor Rick Scott.

Florida’s Republicans are acting like Disney World. They put a lot and effort into the special effects and costumes to make a world of make-believe seem real.

If they want a bill to move forward, it moves forward. So why is it that PRO-GUN LEGISLATION does not move forward? It’s because they really don’t have the will to do so right now.

Yet in 2018, the Republican Supermajority in the legislature moved a massive gun control bill through the House and Senate in a two-week time period and put it on the desk of then Governor Rick Scott.

That’s why it’s imperative that they hear from us. In fact, we need to urge Gov. DeSantis spend his political capital this spring, summer, and fall in calling for a special legislative session. Under the State Constitution, the Governor can request a special session of whatever issue he deems important.

As gun owners and voters, our gun rights are important. As such, we must demand that Gov. DeSantis call for a special session to have solid Constitutional Carry bill and a true Second Amendment Sanctuary bill to be heard and voted on.

As your State Director, I amplify your voices at the Capitol, and I monitor and keep abreast of what is happening in the legislature. And you can bet that I will be monitoring what happens with this.

But I cannot do it alone. 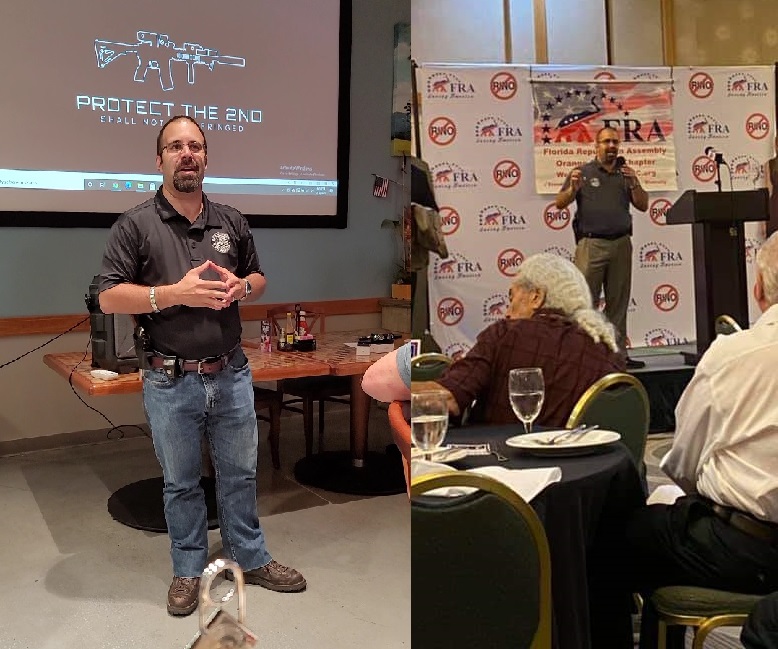 Luis Valdes, GOA’s FL State Director in Melbourne, FL on April 12 and Orlando, FL on April 19 speaking about how the legislature is killing good pro-gun bills.

As your State Director, I am traveling the state to educate those who aren’t in the know on what’s going on in Tallahassee. We can only win if all of us become LOUD!

I make sure to be loud and proud as a gun owner and even open carry when I can to show the crowd that I’m not ashamed of being a gun owner, nor do I hide it; and neither should they.

I made sure to emphasize that on WMMB’s Shooting Straight radio show out of Melbourne, FL this past weekend. I was on the second hour discussing how the trunkless pachyderms are not advancing our gun rights.

You can listen to that interview here.

A number of gun owners today are afraid of being publicly outed as gun owners. They’re afraid of openly showing support and exercising their inalienable rights as enumerated by the Second Amendment.

I want you to please contact the Governor’s Office. Have his email inbox overflowing with requests for a special session to be called for Constitutional Carry and a true Second Amendment Sanctuary bill..

Email Governor DeSantis so he can call for a special legislative session for Constitutional Carry and Second Amendment Sanctuary.