Half Way Through Florida’s Legislative Session

Half way through Session, here is what is happening with the Second Amendment in the Legislature

We’re nearing the half way mark, so here is your news update on what is happening in the Legislature. As your State Director, I’ve been on the ground in Tallahassee amplifying your voices in the very halls that the legislative leadership has tried to block you out of.

Again, the Capitol is still closed to the general public and no one can go inside to meet with their lawmakers to voice their concerns unless they have a scheduled meeting. 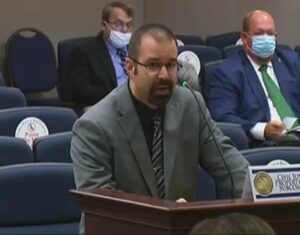 So, with that, let’s get to the news.

March 17 was a busy day. GOA spoke before two separate committees for three different bills with a number of amendments.

That morning, the first bill to be heard was the State Preemption bill, HB 1409, introduced by Rep. Cord Byrd (R). This is a solidly good bill that you can get behind.

Additionally, GOA spoke in support of HB 1343, introduced by Rep. Blaise Ingogolia (R), which requires that the FL Dept. of Agriculture & Consumer Services keep the online application system for concealed weapons permits up and running. In 2020, the department under the leadership of Commissioner Nikki Fried (D) shutdown the system, citing the COVID-19 pandemic as the reason, even though she kept other online application systems up and running.

In the afternoon, GOA was still at the Capitol, pounding the pavement and speaking in support of HB 259 — the House’s version of the Church Carry bill as introduced by Rep. Jayer Williamson (R).

Rep. Fentrice Driskel (D) introduced two amendments to the bill in an attempt to gut it and make this bill worthless. She wanted to make it so that no one could carry at any religious institution.

Your FL State Director, speaking before the Judiciary Committee in support of HB 259.

We were able to defeat the bad amendments and made sure to see Rep. Byrd’s good amendment pass. It made sure that “gun free zone” signs don’t carry the weight of law.

Rep. Bryd submitted that amendment to remove any and all doubt from the bill. So, HB 259 is now a “clean” bill. 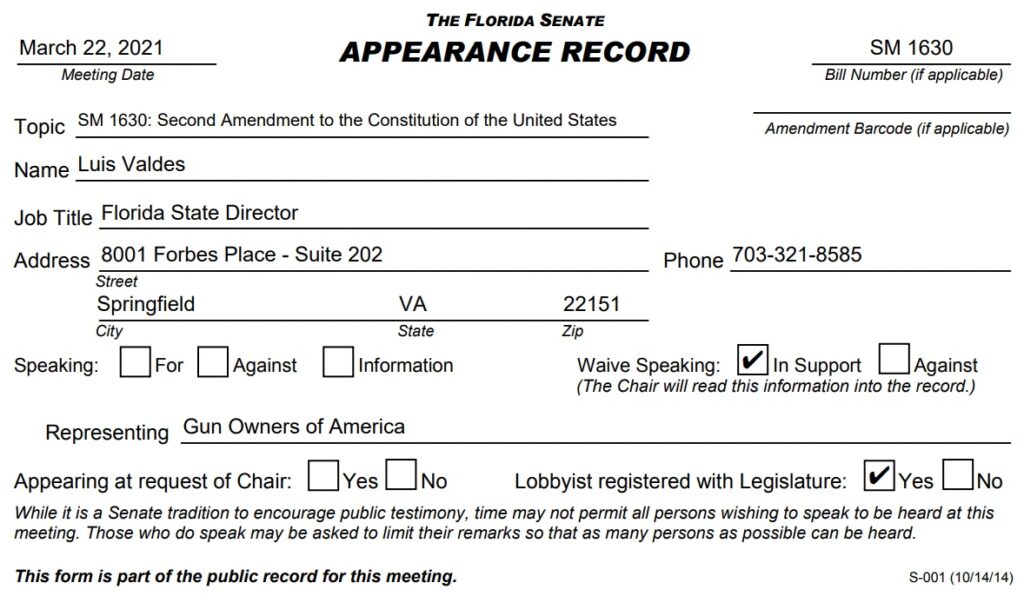 While this is Sen. Baxley’s final term, he is trying his best to advance Second Amendment rights under the political restrictions the Senate President has placed on him. 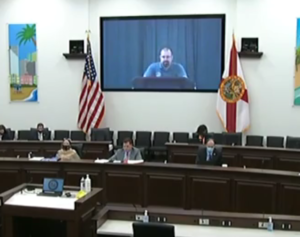 On March 26, HB 259 passed the full House with a vote of 76 yeas to 37 nays. So either this bill goes to the Senate for SB 498, the Senate’s version goes through one more committee and then onto the Senate floor.

On March 29, SB 1884 was debated on and passed the Senate’s Judiciary Committee. This bill was introduced by Sen. Ray Rodrigues (R) and it is the Senate’s version of the State Preemption bill. Of course, GOA was there to make sure this bill advances since state preemption is very important.

As for Constitutional Carry. I spoke with Rep. Byrd back on March 17 since he chairs the House’s Criminal Justice & Public Safety Subcommittee. He said he will not have HB 123, the Constitutional Carry bill, added to the Committee’s agenda since it does not have a Senate Companion Bill. 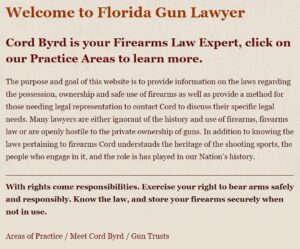 I believe that Rep. Bryd is a good man. As a lawyer, he even promotes himself as a “Gun Lawyer” through his his law firm.

But I question why someone that claims to be a gun rights lawyer would refuse to have a Constitutional Carry bill be heard in the very committee that he chairs.

The reason why is simple.

The ugliness of the Legislative Dictatorship is rearing its ugly head again.

The real truth is that the House Speaker doesn’t want it heard. Rep. Bryd is taking his marching orders from House Speaker Chris Sprowls (R). No one in the Senate submitted a companion bill because Senate President Wilton Simpson (R) will kill all of their other bills.

That’s why we need to exert external pressure upon these Legislative Dictators by engaging Gov. Ron DeSantis. By doing so, he can put pressure on the legislative leadership.

There are some good bills moving forward, but Constitutional Carry still faces an uphill battle.