A Sununu / Bradley Compromise may put you at risk

In my last update, I told you about many of the radical, anti-gun bills being pushed by the anti-gun majority in Concord. 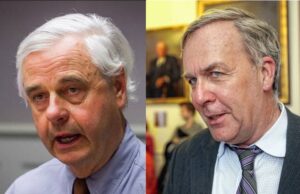 In November, I sent an important update on attempts to enact gun confiscation in New Hampshire.  If you missed it, click here to read it and take action.

Senator Jeb Bradley is mounting a credible attack on your rights to enact gun confiscation.  He recruited anti-gun radical, Rep. Robert Renny Cushing and then, in a dishonest attempt to fool other legislators into thinking that his LSR 2020-2733 is “bi-partisan” and “reasonable,” he recruited Senators James Gray, David Starr, and Ruth Ward along with Rep. Thomas Buco.

You might also remember HB 687. In our alert, I told you that the bill came out of the House Criminal Justice and Public Safety Committee without any recommendation.  What this means is that HB 687 will go before the House of Representatives on January 8 without a committee recommendation — neutral, rather than “inexpedient to legislate” (ITL) or an “ought to pass” (OTP) recommendation.  While this is a small win, HB 687 has not yet been defeated.

You can be sure that the supporters of gun confiscation will be working overtime to get the House of Representatives to adopt an “ought to pass” motion.

GOA Members did an outstanding job contacting the Criminal Justice and Public Safety Committee. Now, I need you to contact your own state reps. and urge them to vote NO on an “ought to pass” motion and YES on an “inexpedient to legislate” motion.

Here is what you need to do:

Please contact your own State Representatives and Senator (above) to urge them to oppose any form of gun control or gun confiscation that they may be asked to consider.

No matter who the sponsor is and what the editorial writers claim.  Please make it clear that the Bradley / Sununu / Cushing compromise is a solution in search of a problem.  Let your legislators know that you categorically reject the notion that bureaucrats and court-appointed guardians know what’s best for our seniors.

Then, contact House Minority Leader Dick Hinch (below) and urge him to keep his caucus in line. Tell him  to make sure that every Republican House Member votes against HB 687 – and any other form of gun confiscation or gun control.

As appetite for gun control weakens, Ralph Northam is trying to change the subject