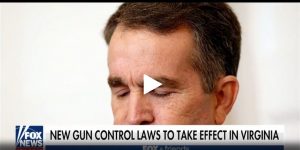 A battle over gun control in Virginia with national implications is heating up as the legislature prepares to vote on sweeping new restrictions and localities band together to defy them in growing numbers.

Virginians turned out to debate the measures and other issues at public budget hearings on Thursday, less than a week before the General Assembly’s first legislative session of 2020. Both the Virginia Citizens Defense League (VCDL) and Gun Owners of America specifically warned about Democratic Gov. Ralph Northam’s related budget proposal, which directs $250,000 for the Department of Corrections to incarcerate people as a result of new restrictions.

Another measure included over $4 million and 18 “authorized positions” — part of an apparent team that Second Amendment groups warn could be used to enforce an assault weapons ban. The new General Assembly is expected to vote on two bills in particular – SB 18 and SB 16 – which would ban assault weapons, raise the minimum age of purchase to 21 and require background checks for any firearms transfer.

In the run-up to the session and following state elections in November, a defiant protest movement has taken shape that could influence similar movements in other states. More than 100 cities, towns and counties have passed “sanctuary” resolutions meant to flout an assault weapons ban and other proposals…