The Pool of Gun-Owning Voters is Growing

Why Anti-Gun Politicians Should be Worried this November

You know that our rights have come under tremendous attack this year. 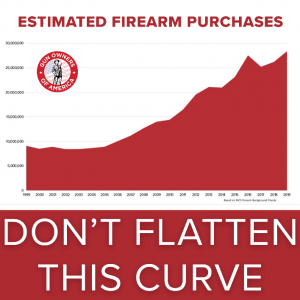 All around the country, many governors and mayors tried to shut down gun stores and gun ranges in the name of keeping us safe from a virus.

Of course, these same politicians seemed to have no problem with rioters and looters, arguing that they need to be given “their space.”

But in the face of these attacks upon our security, Americans are buying guns at a record pace.

And at Gun Owners of America, we have been fighting back to curtail the spread of the gun control virus across the country.

GOA has worked with various local groups to sue in court and to get gun stores and ranges reopened. And we have persuaded sheriffs to resume the process of issuing concealed carry permits.

Our legal team has active cases in court rooms from coast-to-coast. We will be updating you on these efforts in upcoming alerts.

But there are some other key victories from around the nation that you may have missed.

Good News from Around the Nation

1) Stopping Red Flag Laws. In May, Oklahoma enacted the first-in-the-nation law to prohibit funds for “Red Flag” legislation. This law effectively bans gun confiscation orders at any level of government.

GOA is also grateful to all of the gun owners and activists in the Sooner State who worked hard to press their legislators – and the Governor – to pass this legislation.

Those who wish to get this legislation introduced in their state can find the Oklahoma law here.

2) Ending lawless gun bans during emergencies. In June, grassroots gun owners in Louisiana helped push four pro-gun bills into law, including a ban on future gun bans. Taken together, these laws will:

It should be noted that Act No. 325 was introduced and pushed into law specifically because of the activism of GOA activists. Rep. Blake Miguez (R-Dist. 49) introduced the bill in response to appeals from GOA members who were upset about executive officers, such as New Orleans Mayor LaToya Cantrell, who were claiming the authority to limit or prohibit the sale of firearms during the declared emergency this year.

So kudos to the activism of GOA supporters – and for legislators like Rep. Miguez who listen to their constituents!

3) The pool of gun-owning voters is growing. Americans right now are setting all-time records with regard to gun sales. And many reports indicate that the spike in gun purchasers is from people who are buying their first gun — some estimates putting the number at 40 percent of the overall number of gun sales. 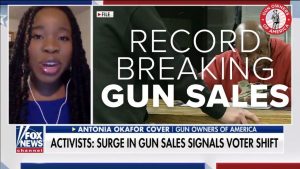 And GOA’s Texas State Director Rachel Malone addressed the phenomenon in the Houston Courant on Saturday. She said these newbies are “regular Americans — soccer moms, store clerks, businesspeople, blue collar workers, college students, grandparents — who have suddenly realized that they’re vulnerable and they don’t trust the government or anyone else to keep them safe. They are convinced that a gun is a tool that can help them stay safe, and they believe this strongly enough to invest in their own first firearm.”

And while it’s exciting that so many new Americans are taking their duties of self-defense seriously, here’s the real kicker: This new segment of gun owners could, Rachel says, “change the political landscape” by wielding “incredible power as a voting bloc.”

She’s absolutely right. These new gun owners could be the “tipping point” to elect candidates who will stand up for our right to keep and bear arms, and send “squishy politicians” packing. Read the rest of Rachel Malone’s article here.

A Pro-Gun Tidal Wave Could be Cresting

There’s already some evidence that gun rights will be a big issue in the upcoming election. Gun dealers report that these new gun buyers, who are scared by the deterioration of society, are now outraged by the gun restrictions which they formerly supported.

And The Washington Free Beacon reports that many first time buyers who “generally leaned toward enhanced restrictions [now] find themselves more skeptical of gun control.”

One former gun control proponent in California finally decided it was time to buy a gun to protect his family. But he had to wait over a month before he could finally purchase and pick up his weapon.

This journey has finally helped him to see the light. He commented that — during the time it took him to get his gun — bad guys in the area would have been able to buy their illegal guns “out of the back of an El Camino in a shady part of town with zero background checks.”

He now owns the very AR-15 which he used to think should only be available to military and police. And he’s considering running for office — a new believer in the right to keep and bear arms. He’s not alone.

While the above stories are anecdotal, it is possible that a pro-gun tidal wave could be cresting. When Staunton, Virginia held elections for city council in May, voters defeated every Democrat office holder who was running for reelection. This was stunning, given that the city of Staunton had twice voted for Obama … voted for Hillary … and for the current Democrat governor.

But Virginia has been a hotbed for gun control this year, and voters are rebelling. This was not lost on the media which reported that “gun control legislation” was a key issue in the transformational election.

The election results shocked the political intelligentsia — one of whom noted that what happened in Staunton was “stunning almost beyond words.”

Time will tell what actually happens. But be encouraged. There are a lot of good things happening, about which the mainstream media will simply choose not to tell you.

The Supreme Court Fiddles While the Second Amendment Burns – Part 3, The Way Forward