More 2A Victories from Coast to Coast!

But we’re not doing this alone. We couldn’t realize these victories without your help.

You have been an indispensable support. And I certainly hope you won’t get tired of winning.

Yesterday, we reported good news out of North Carolina. The mayor of Greensboro reversed herself and now agrees that gun stores within city limits can remain open, after being contacted by Gun Owners of America (GOA) and Grass Roots North Carolina (GRNC).

The Mayor had previously told the media that gun stores were not “essential” businesses.

And the sheriff in that same county began reissuing permits after receiving a legal “shot across the bow” from Gun Owners of America.

These victories are just the tip of the iceberg.

Thankfully, the administration responded favorably and issued a revised guidance that now classifies gun stores as “essential.” As reported by The Washington Times on Saturday:

“That [revised] guidance came on the heels
of a Friday letter to the Trump administration from the
Gun Owners of America (GOA) and Gun Owners of California (GOC),
which requested such classification.”
— The Washington Times, March 28, 2020

This revised classification has created ripple effects from coast to coast. In Los Angeles, the sheriff has done an about-face and is allowing gun stores to remain open.

And states like New Jersey have now reversed themselves and declared that gun stores can remain open.

GOA’s legal team is currently looking at other states which are refusing to abide by the federal guidance regarding gun stores.

We will bring you updates as news develops.

After some sheriffs stopped issuing Licenses to Carry Firearms (LTCF) in March, GOA sprang into action. 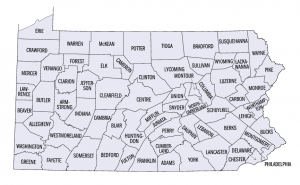 I coauthored a letter with our Pennsylvania State Director, Dr. Val Finnell, and sent it to every sheriff in the state.

We explained to them that, by law, they are required to process these applications. Not only that, Dr. Finnell outlined specific measures that other sheriffs were taking to reduce the risk of infection.

But bottom line: Our letter served as a reminder to these government officials that it is imperative they carry out the letter of the law and issue concealed weapons permits — even during the Coronavirus pandemic.

GOA followed this letter with a grassroots action alert in the Keystone state. Our activists deluged their sheriffs, demanding that they get back to work and preserve their constituents constitutional rights protected by the Second Amendment.

Well, the sheriffs were amazed at outpouring of support for the Second Amendment.

Westmoreland County Sheriff James Albert said: “Wow, we got a lot of blowback” from residents of the county.

And guess what? Sheriff Albert has started reissuing permits, and so have many other sheriffs as well.

This shows the power of grassroots activism. We are VERY THANKFUL to our Pennsylvania members for taking action and making a difference in their state!

And we are grateful that many Sheriffs have resumed issuing permits to their county residents.

Constitutional Carry would fix the COVID-19 fears in Pennsylvania

Tragically, this snafu in the Keystone State is the inevitable result of the government forcing good people to get permission from local officials before exercising their rights. 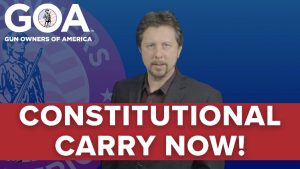 In the latest episode of Bullet Points with Dan Wos, he explains why the current Coronavirus crisis shows the need for Constitutional Carry.

Whenever our natural rights are infringed, you can expect there to be negative repercussions.

But in 17 states, law-abiding citizens can carry firearms without permission and without a permit.

Permitless carry means no delays … no infringements … and no denials of people’s God-given rights.

All of which underscores the need for passing Constitutional Carry all across the nation.

I recently discussed the need for Constitutional Carry on The Dove TV. I explained what a difference permitless carry would make in Pennsylvania and other states, because the right to keep and bear arms shouldn’t be suspended in times of emergency. 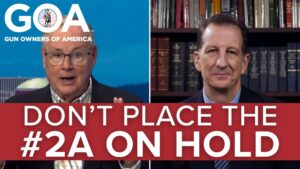 I also spoke about the efforts some state organizations have taken to defend your rights, as well.

For example, the Firearms Owners Against Crime (FOAC) has been doing a great job lobbying officials in the Pennsylvania capitol.

The Governor initially shut down the state but left gun stores in limbo. So FOAC did a lot of behind the scenes lobbying … their attorney launched a lawsuit … and GOA members supplemented these efforts through grassroots activism.

The good news is that the Governor reversed himself last week and specifically exempted gun stores from the shutdown (for the purpose of selling firearms).

As you can imagine, there are many other states and localities that GOA is involved in defending right now.

We can’t report on them all yet, so please stay tuned for future updates.

In the meantime, we thank you for standing with Gun Owners of America.

Please make sure to distribute this alert to encourage your pro-gun family and friends. Let them know that with their support to GOA’s Legal Defense Fund, grassroots organizations can make a huge difference!