“GOA is spending a lot of money on lawsuits – to include a victory here in Massachusetts, of all places, against the Governor and our tyrannical attorney general. They deserve our support.”

GOA’s legal team exists to help protect the rights of gun owners around the nation.

In addition to challenging unconstitutional laws, GOA has helped defend gun owners who are being persecuted for lawfully exercising their rights.

What follows below are the top-ten cases where Gun Owners of America and its foundation (Gun Owners Foundation) have been involved. 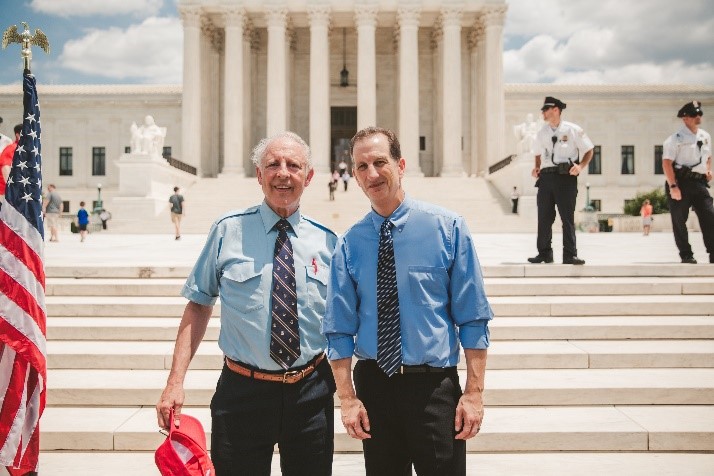 1. DC v. Heller (2008). In this landmark Supreme Court case, GOA’s legal analysis offered a uniquely principled perspective in defending the right to keep and bear arms. After examining all the briefs in the case, the editors at USA Today argued that GOA’s brief was the only one employing a no-compromise analysis based upon the “shall not be infringed” language in the Second Amendment.

In fact, the legal theory in the GOA brief is the one which actually won out. In Heller, the Court adopted a text/history test for the Second Amendment – which is exactly what the GOA brief had argued.

Dick Heller himself would later say: “When the District of Columbia tried to deny me my right to own a handgun, Gun Owners of America fought for me. Thanks to groups like GOA, we won a groundbreaking federal court decision for your gun rights affirming the Second Amendment protects an individual’s right to keep and bear arms.”

Sadly, the Heller decision contained the now infamous page 54 which, among other things, suggested that the creation of Gun Free Zones around schools is compatible with the Second Amendment. But there are two things about this.

First, that section is dicta — or editorializing by the court — which was put there by Justice Scalia to get Anthony Kennedy’s vote. It’s unfortunate that this language is there. But dicta is, in and of itself, not binding on the lower courts.

Secondly, one shouldn’t neglect how devastating the Heller decision was to the anti-gun Left. In his minority dissent, Justice Stephen Breyer said that Heller “threatens to throw into doubt the constitutionality of gun [control] laws throughout the United States.”

Justice Breyer was right on this point. Heller dealt a devastating blow to the whole premise of gun control, because in this decision, the Heller Court:

“The editors at USA Today argued that GOA’s brief was the only one employing a no-compromise analysis based upon the “shall not be infringed” language in the Second Amendment.”

So truly, the Heller decision was a seismic shift in the legal world regarding our gun rights. It is hard to overstate the benefits of this Supreme Court decision.

After all, the Heller case is the reason that many cities later repealed their gun bans. It provided the reasoning – that judges like Brett Kavanaugh (as a judge on the DC Circuit court) – used for arguing that bans on so-called “assault weapons” are unconstitutional. It opened the floodgates for the advancement of Constitutional Carry legislation. And last but not least, Heller provided the legal basis for the second landmark gun case two years later.

2. McDonald v. Chicago (2010). The Supreme Court built upon the earlier Heller decision by recognizing the Second Amendment protects a fundamental right which cannot be denied by states and localities. And in doing so, the Court used the Fourteenth and Second Amendments to strike down Chicago’s ban on handguns.

As in Heller, GOA was pleased to see that the Court again rejected “judicial interest balancing” in favor of a textual and historical analysis of the Second Amendment.

Not only that, GOA was very pleased to see that the contents of our brief especially resonated with Justice Clarence Thomas, who wrote a very powerful concurring opinion for the majority. In fact, it was the Thomas opinion that was later quoted heavily by a Wisconsin judge who specifically used Thomas’ reasoning in ruling that the state ban on concealed carry was unconstitutional. Illinois’ ban on concealed carry would fall roughly three years later. So the McDonald case has already resulted in gun control laws being struck down — not only in Illinois, but in the rest of the country, as well. 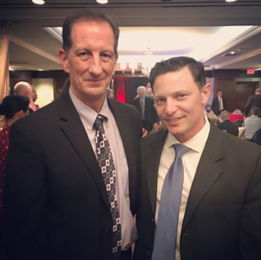 As in the Heller and McDonald cases, GOA argued in Wrenn that judges have no authority to use a “balancing test” approach to Second Amendment rights. In such instances, judges attempt to weigh whether officials have a compelling government interest which justifies restrictions on a constitutionally-protected right. Or put more simply, judges try to determine if the law is more important in their eyes than the Constitution. But Gun Owners argued that the Second Amendment protects the right to keep and bear arms against all infringements, and that alone invalidates all “judicial balancing tests.”

Incredibly, the D.C. Circuit broke with its own precedent and adopted the “text and history” approach that GOA was advocating, and which the Supreme Court had mandated in the 2008 Heller case. This pro-gun decision is significant because it sets up a potential conflict at the appellate level with other concealed carry cases that have been decided differently using balancing tests. And such conflicts can easily justify the U.S. Supreme Court taking up such a case.

4. Rodriguez v. United States (2015). The Supreme Court’s official blog gave a nice analysis of one of the points made in GOA’s brief, which was the only amicus submitted in favor of Dennys Rodriguez. The Court’s 6-3 victory in this case sends a clear message to law enforcement, that a traffic stop cannot be extended beyond its original purpose without reasonable suspicion that would justify detaining an individual in the first place — and adds an extra layer of defense for gun owners, because the government cannot arbitrarily search one’s home or car.

5. Johnson v. United States (2015). The Supreme Court sided with Gun Owners of America in preventing a mandatory minimum sentence from being applied against a gun owner merely because he had possessed a firearm. The 8-1 victory in this case helps prevent the demonization of firearms and averts the ability of prosecutors to bootstrap almost any violation by a gun owner into a much longer jail term.

6. Collins v. Virginia (2018). The liberal Slate.com said the Supreme Court gave gun rights groups like GOA “a reason to rejoice” when handing down its 8-1 ruling in Collins, and summarized the ruling in this case as guaranteeing that “cops [will] generally need a warrant to search a vehicle in your driveway” which protects gun owners who “want to protect their homes and families, using lethal force against intruders if necessary.”

7. United States v. Arwady (2015). GOA successfully assisted Bob Arwady, a former FFL, against bogus charges brought by the ATF. After tens of thousands of dollars spent – and hundreds of hours clocked in over a six year period – GOA helped convince a jury to exonerate Arwady on all accounts, including his supposed straw purchase charge and an allegation claiming he was “engaged in the business” without a license.

8. Henderson v. United States (2015). A Border Patrol agent’s pot-related conviction resulted in the government taking his firearms collection, which totaled more than $3,500. Gun Owners of America went to bat for Agent Tony Henderson and argued he should be able to sell his guns, which at the time, were in the FBI’s possession. The Supreme Court unanimously ruled in GOA’s favor.

9. Manuel v. Joliet (2017). Gun Owners of America got involved in this litigation to help strengthen American’s Fourth amendment property interests. The victorious 6-2 decision at the U.S. Supreme Court now puts a greater burden on local governments that violate the property rights of Americans (including gun owners) – and thus, provides a powerful disincentive for officials to conduct searches and seizures in violation of the Fourth Amendment. 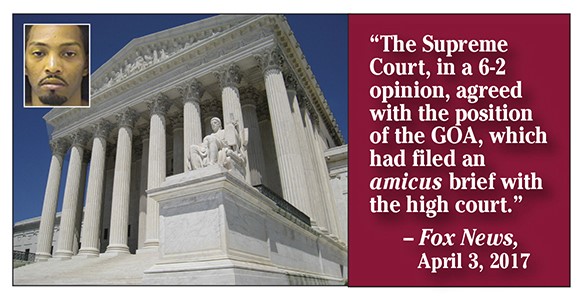 GOA helped defend Elijah Manuel (inset) who was jailed on trumped up charges for seven weeks.

10. Susan B. Anthony List v. Driehaus (2014). This decision is extremely important for pro-gun supporters, as the net effect of this verdict means that anti-gun state bureaucrats will find it much harder to squelch GOA’s First Amendment speech. Had the Supreme Court ruled against us, state agencies would have been permitted to determine alleged truth and falsity in the context of election campaigns, essentially giving the government the power to silence speech it does not like – thus making it extremely difficult for GOA to hold public officials accountable.

Truly, it’s difficult to come up with a Top Ten list because there’s always other cases that could have been easily added. For example, consider these important victories where GOA was involved:

These cases are just the tip of the iceberg. There are many others that could be mentioned here, and that’s why we are grateful to gun owners who have contributed to help GOA’s work in defending gun rights.

Our legal work includes bringing cases as the chief plaintiff, such as our challenge to the ATF’s bump stock ban. Or it could involve our filing of amicus briefs, which have been shown to be very influential in legal proceedings.

Even so, while there have been many victories, there have also been disappointments. In some important battles, anti-gun judges simply refused to consider the text and history behind the Second Amendment. Recent examples would be our challenge of the National Firearms Act in the Kettler case (2018) and our challenge of the post-1986 ban on machine guns (the Hughes Amendment) in Watson v. United States (2015) and Hollis v. Lynch (2015). 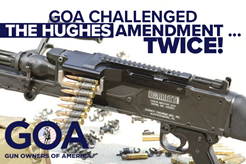 Even so, we have had our share of victories. And Gun Owners of America and Gun Owners Foundation couldn’t do any of this without your help. So we greatly appreciate those gun owners who have given to our legal work.

1 As a side note, the Judge in the Kettler suppressor case completely dropped all prison time against Jeremy Kettler. So there was at least a silver lining in this case.

A Pro-2A Senate Majority is Within Reach!