On November 2, Gun Owners of America (and its foundation) joined forces with Dick Heller — the very one who beat DC’s gun ban before the Supreme Court in 2008.

Working in tandem, Gun Owners filed a brief in the U.S. Court of Appeals for the Fifth Circuit in support of a challenge to the federal machine gun ban, which was stuck on at the last minute to an otherwise pro-gun bill in 1986.

First and foremost, Gun Owners argues that the “arms” protected by the Second Amendment include fully automatic weapons, and that Supreme Court opinions have bolstered this view. 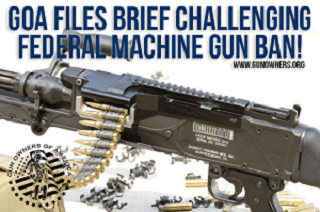 Our brief explains that the Second Amendment is not about hunting or target shooting, but about the preservation of liberty.

Go here to help financially support the GOA brief in this case.

Since its founding, Gun Owners of America has built its reputation as the “no compromise” gun lobby.

We want to repeal any restriction that violates the “shall not be infringed” language of the Second Amendment — going all the way back to 1934.

So GOA is not only working on the above machine gun case. We also want to file another brief supporting this same proposition — that a machine gun ban is inconsistent with the protections afforded in the Bill of Rights.

But we need your help to file it.

We have always taken the position that the “arms” mentioned in the Second Amendment are the type of weapons that an infantryman in current military service would be issued. These are, in the words of an old Supreme Court case, “part of ordinary military equipment.”

One Court of Appeals judge has explained that the Second Amendment protects the “lineal descendants” of the arms brought to muster on the village green in revolutionary times.

If the purpose of the Second Amendment is to preserve a “free State,” then the people comprising the militia need to have the same type of “arms” that are available to the military.

We think you will like the arguments we made in our first brief to explain this important principle to the court.

Among other things, we quote Justice Joseph Story’s explanation regarding the true purpose of the Second Amendment:

The right of the citizens to keep and bear arms has justly been considered as the palladium of the liberties of a republic, since it offers a strong moral check against the usurpation and arbitrary power of rulers, and will generally, even if these are successful in the first instance, enable the people to resist and triumph over them. [Joseph Story, Commentaries on the Constitution, Volume III, p. 646.]

If the arms owned by the people are profoundly inferior to those of their “rulers,” the ability of the people “to resist” will be diminished, and the “strong moral check” on those rulers will be lost. Of course, that is what Diane Feinstein and her ilk want.

GOA is unique among pro-gun groups

Sadly, other pro-gun groups have run the other way when fully automatic weapons are mentioned.

In fact, a lawyer for one of these other “pro-gun” groups took the position before the U.S. Supreme Court that it was completely reasonable for the federal government to prohibit private ownership of fully automatic weapons.

But when David Olofson’s AR-15 malfunctioned and he was charged with owning a machine gun, it was GOA that came to his aid — not any other gun group.

If you agree with us about fully automatic weapons, we could certainly use your help.

By making a special contribution to Gun Owners of America, you will help fund the Hollis brief we just filed, and to make possible the next brief that we would like to file, if we raise enough support.

The second case is U.S. v. Watson in the U.S. Court of Appeals for the Third Circuit (in Pennsylvania). GOA plans to make similar arguments to those we made in Hollis — and by bringing several cases in multiple districts, we hope to force the Supreme Court to decide this issue in favor of Second Amendment rights.

Again, please consider making a contribution of $10, $20, $50 or more to help support these two cases.

Thank you for your defense of liberty!