Gun Owners of America Is Fighting for Wyoming’s Gun Rights! 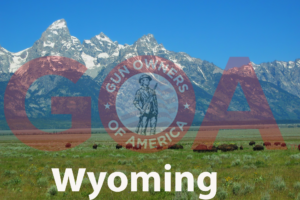 Read 🔽 below to see how GOA has defeated several efforts by Biden to restrict the rights of Wyoming citizens.

On March 21 of this year, the Wyoming Governor signed GOA-backed SF0102 (Wyoming’s Second Amendment Protection Act) into law. This law makes it illegal for state or local officials to institute or cooperate with unconstitutional federal gun control. This law has the nation’s strongest criminal penalty of one year in jail for any official who violates the constitutional rights of Wyoming citizens.  Despite misinformation being portrayed about SAPA by “false flag” Second Amendment supporters, this law provides real protections.  Be sure to read the attached information sheet which explains the truth about both SF0102 (which passed) and SF87 (which did not pass).

Biden’s ATF nominee, Steve Dettelbach, has spread some of the worst disinformation and downright lies about guns and your Second Amendment rights. Dettelbach is a radical anti-gunner who advocates for universal background checks, wants to reinstate the “assault weapons” ban, and repeats the tired old lie that the Second Amendment is only for sport.   Please, add your name to our pre-written letter to pressure your two Senators to VOTE NO on Biden’s nominee for ATF director, Steve Dettelbach.

A coalition of antigun forces is urging the Bureau of Alcohol, Tobacco, Firearms and Explosives (ATF) to shut down Polymer80, a popular manufacturer of AR receivers, pistol frames and handguns. Gun Owners of America (GOA), a pro-gun organization, defended Polymer80 in the wake of this call to run them out of business.

“This is nothing more than total B.S.—that is, Blame Shifting by the anti-gun Left,” said Erich Pratt, Senior VP of GOA in an email to Guns America. “For two years, they have advocated policies to defund the police and throw criminals back on the street. But rather than blame their own failed policies for the rise in crime, Leftists are instead trying to blame homemade guns for the rise in crime. However, the actual statistics don’t support their claims,” he said.

➡️GOA Punches Back Against Biden’s Ministry of Truth

On Thursday, Gun Owners of America (GOA) and Gun Owners Foundation (GOF) filed a Freedom of Information Act (FOIA) request with the U.S. Department of Homeland Security (DHS) asking key questions about the Biden Administration’s plans to create a “Disinformation Governance Board.” In Biden’s America, the “Ministry of Truth” will operate under the moniker of the Disinformation Governance Board, which will be chaired by left-wing dystopian author Nina Jankowicz, who has called for censorship and spewed several far-Left conspiracy theories in past years.

ATF just officially dropped its disastrous final rule, which will regulate certain gun parts kits and eventually add 100% of gun purchases since August 2002 into its nearly billion-record gun registry. Senator Ted Cruz and other Second Amendment advocates have introduced a Congressional Review Act (CRA) which will force a vote in the Senate. This legislation will force all Senators to declare on their permanent voting record if they think ATF should expand its unlawful registry.

Make sure to hit the “Take Action” button to let them know how much this will influence your vote in their next election.

Joe Manchin just announced that he will vote to confirm Ketanji Brown Jackson to the Supreme Court. That’s why we’re diverting emergency funds into our ad budget to generate a nonstop stream of phone calls into Manchin’s office – as well as 4 other key swing Senators.With Manchin up for re-election in 2024 – a presidential year in which there will be MASSIVE TURNOUT among pro-2A voters – we need to show him just how angry the public will be if he puts Jackson on the Court. Jackson has tried her hardest to hide her true anti-gun sentiments from the Senate Judiciary Committee and the American public, but you and I know the truth. If Jackson takes a seat on the Supreme Court, here’s what she could rule as constitutional:..

Gun Owners of America (GOA) filed a petition for Writ of Certiorari in the United States Supreme Court challenging the Bureau of Alcohol, Tobacco and Firearms’ (ATF) 2018 reclassification of bump stocks as “machineguns.”

GOA has been in litigation with ATF since the day the ban was published and was able to win a victory in the U.S. Court of Appeals for the Sixth Circuit, which was later overturned when the 16 judges on that circuit split evenly between GOA’s position and ATF’s position.

Freedom continues to advance – thanks to the hard work from GOA activists! On Monday, Wyoming Governor Mark Gordon (R) signed a GOA-backed Second Amendment Protection Act (SAPA) into law. This 2A sanctuary now has one of the strongest penalties in the nation! Wyoming’s SAPA makes it illegal for state and local officials to enforce or cooperate with unconstitutional Federal gun control. And the GOA-supported law imposes penalties of $2,000 and up to one year in jail on any official who would help enforce federal gun control. This should be a huge deterrent to any official considering enforcing Joe Biden’s anti-2A agenda. GOA Wyoming Director Mark Jones worked closely with law enforcement and key leaders in the House and Senate to get this legislation onto the Governor’s desk.

If you would like to be a part of the fight for your Second Amendment Rights then Take Action below!

Join or Donate to Gun Owners of America Today to Help Fight For Wyoming’s Gun Rights!