From the Courtroom to State Capitols, GOA Defends Your Rights

You can support our 2A-protected rights by giving a tax-deductible contribution to help our case defending standard capacity magazines.

California law bans any magazine that can hold over ten rounds. But in March, a district court judge blocked the law from going into effect.

California appealed the decision to the full Ninth Circuit Court. Eighteen Democrat Attorneys General from around the country then followed suit by submitting a brief in support of the state’s 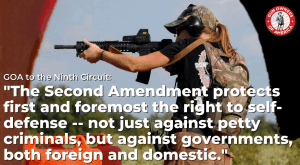 GOA and its legal arm, Gun Owners Foundation (GOF), have weighed in on this case in conjunction with Gun Owners of California, the Heller Foundation, and several other pro-gun organizations.

This is an important case when it comes to the ability to defend oneself, because the government has no business telling people how many rounds they “need.”

We refute several anti-gun arguments in our brief, including the idea that the Second Amendment does not apply to so-called “military-style” firearms. For example:

The Second Amendment protects first and foremost the right to self-defense — not just against petty criminals, but against governments, both foreign and domestic. In order to combat foreign aggression or domestic tyranny, military-grade arms are, as the framers understood, “necessary to the security of a free State.”

You can read the entire brief here.

And you can help support this case through one of two means:

1) Give a tax-deductible contribution to help support this case, and others like it, by going here.

GOA in the Media and on the Front Lines