Red Flag Laws and the Misguided Worship of Due Process

Congress is in one of what it euphemistically calls its “District work periods,” and so the pressure is off gun-owners for a fortnight.  However, the threat will resume right after Columbus Day — which, surprisingly, is still a federal holiday.  Gun-owners correctly perceive their Second Amendment rights to be balanced on the edge of a knife, awaiting the pressure to build again after the next well publicized shooting.

For gun-owners, the pattern is all too familiar: a mass shooting, such as those in El Paso and Dayton, followed by massive amounts of publicity by the anti-gun media and posturing politicians, accompanied by a demand that Congress “do something,” such as red flag laws.  In response, gun-owners demand that their elected officials stand firm against the pressure, holding their collective breath, waiting to see how many of those members of Congress who promised to support gun rights in the months before the last election are willing to sacrifice those principles a year before the next election. 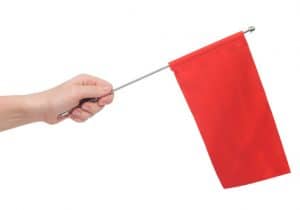 Senator Lindsey Graham (R-S.C.) promised that under his bill, to get a federal grant, the state red flag laws would have to provide “due process.”  Similarly, President Trump has sought to assure the public that any red flag legislation will provide for “rapid due process.”  When questioned, most congressional Republicans say they will support police seizing guns only if rigorous due process is provided.  Don’t buy it.  Red flag laws violate the Second Amendment, and “due process” is not a magic wand to be waved to make the infringement go away.

Due process is the idea that the government must follow the procedural rules under our system of justice.  These guarantees protect Americans against arbitrary decisions by the government to take away life, liberty, and property.  The Supreme Court has described due process circularly as “what process is due.”  There is no one set of rules for all situations.  Typically, the greater the liberty interest at stake, the more extensive the due process protections must be.

Most associate due process with concepts like the right to a hearing, an unbiased decision-maker, the right to be represented by a lawyer, and the ability to present evidence in your defense.  But is it really true — as the president and many others appear to believe — that the government can take away someone’s rights, so long as it showers him with lots and lots of due process?  The promise of due process is little comfort when those exercising that process have no respect for the rule of law.

Imagine if the government accused you of wanting to be a drug-dealer.  You’ve never been charged with — or even accused of — having actually sold drugs.  But still, someone thinks there’s a good chance you may in the future.  So you’re given a hearing, allowed to hire a lawyer, and permitted to testify why you won’t become a drug dealer in the future.  But at the end of the day, a judge still believes there’s an unreasonable risk that you will enter the drug business.  So, in order to prevent that possibility, for the next year or so, you no longer have any Fourth Amendment rights.  The police may now stop your car and search it any time they wish and enter your home to search for drugs at will.  What, that doesn’t sound fair?  What’s the problem?  You were given loads and loads of due process!

The government can’t strip away Fourth Amendment rights simply because, in doing so, it has complied with due process rights.  The Fourth Amendment still protects against “unreasonable searches and seizures” and requires a warrant based on probable cause.  Likewise, the Second Amendment protects “the right of the people to keep and bear Arms” — regardless of whether the government thinks it’s a good idea that a particular person have guns.

Certainly, young children, illegal aliens, and murderers are not part of “the people” protected by the Second Amendment.  Current law makes firearms possession illegal by a person convicted of a felony or who has been “adjudicated as a mental defective or has been committed to any mental institution.”  But there is absolutely no historical or legal precedent for taking Second Amendment rights away from those who the government’s “precogs” declare may commit a crime in the future.

President Trump should be familiar with this concept.  In response to the Mueller investigation, President Trump lamented that he should be cloaked with the presumption of innocence and that it’s a tall order to prove a negative — for someone to show that he didn’t commit a crime.  How true.  But how much harder is it for a person to prove that he won’t do something in the future?  It’s impossible.  Yet that’s the standard red flag laws impose on their victims.

Three of the governments in the last century that experimented with their versions of red flag laws, allowing government judges to declare political enemies mentally unfit in order to make it easier to subjugate them, were communist (red) China, the Soviet Union, and Nazi Germany.  Each of those nations had lots of red in its flags.

History has taught us time and again that governments are far more dangerous to liberty than are criminals.  A person’s odds of being murdered by a tyrannical government (termed “democide”) are astronomically higher than by a mass shooter.  Yet too many people seem oblivious to the fact that far worse than some criminals getting access to guns is a system where the government gets to decide who should be disarmed.  In fact, that is the beginning of the end of a free society.

Many people won’t like to hear this, but it has never been the job of government to prevent future crime.  If it were, then our entire Constitution and Bill of Rights would stand as an obstacle.

Lindsey Graham has moaned that “the Second Amendment is not a suicide pact.”  What he’s really saying is that constitutional rights shouldn’t impede the government doing whatever it wants to do.  On the contrary, the Bill of Rights protects the freedoms of all Americans.  There’s no way around that.  In a truly free society, bad people will sometimes do bad things — like falsely yell “fire” in a crowded theater.  The role of government is to punish bad actors and provide justice to victims — after the commission of an illegal act.

If the government takes on the improper role to prevent future crime, that inevitably will result in an Orwellian surveillance state, where freedom is theoretical at best.  Many believe we are already on that road, and red flag laws are certainly a big step in the wrong direction.

The maxim is still true that the only thing that can stop a bad guy with a gun is a good guy with a gun.  A government agent armed with a red flag law is a poor substitute.  Even the left-leaning Mother Jones magazine has questioned whether red flag laws would actually stop mass shootings.

Regardless, it is not up to our “overlords” to weigh and balance Americans’ constitutional rights against the potential future danger they may pose.  And the robust protection of Fifth Amendment due process rights means little if the process results in the infringement of protections that the Second Amendment unequivocally declares “shall not be infringed.”