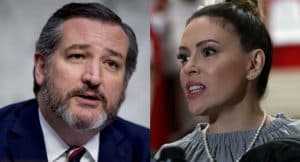 The day after the shooting in Odessa, Tex., the junior senator from that state, Ted Cruz (R), was on Twitter laying out the case to actress Alyssa Milano that passages in the Bible support the rights of gun owners.

There’s a lot going on there. Cruz’s argument sums up a somewhat prevalent one in conservative Christian circles — that gun ownership as laid out in the Second Amendment is a God-given right. It’s an argument we’ve seen publicly in the wake of recent mass shootings. Religious conservatives have argued many times before that supporting legislation to put limits on gun ownership would go against their deeply held convictions.

Response to Saturday’s deadly shooting in Odessa followed a by-now-familiar pattern. News broke of the shooting, which left seven people dead and 19 injured. It came less than a month after mass shootings in El Paso and Dayton, Ohio, and prompted calls for tighter gun restrictions from many Democrats. These were followed by rebuttals from gun-rights supporters arguing that gun laws wouldn’t deter shootings…

After a 2017 shooting at a Southern Baptist Church in Texas, Russell Moore, president of the Southern Baptist Convention’s policy arm, told The Washington Post’s Sarah Pulliam Bailey: “I think gun control proponents are misguided in trying to persuade others of their position in the way they usually go about it. There are not two sides here about whether shootings should be stopped, laws enforced, and criminality punished, but rather two sides about whether gun control is a prudent way to carry out those common goals.”

There are other biblical passages that conservative Christians cite to support gun ownership. Gun Owners of America, a group that positions itself to the right of the National Rifle Association on gun rights, offers detailed explanations on its website on topics like “Self Defense Versus Vengeance,” “Self Defense in the New Testament” and “Did Christ Teach Pacifism?”

[One can read a Fact Sheet on the Bible and Gun Control here or listen to a radio debate here on the same topic.]

There is data that supports Young’s conclusion suggesting that Cruz and Schaefer are not alone. More than 40 percent of white evangelicals own a gun, according to a 2017 Pew Research Center survey, making the group more likely than members of any other faith group to own a gun.