Background checks were sold to gun owners as a bill of goods in the 1990s.  But consider how ineffective (and dangerous) they have become to our Second Amendment rights: 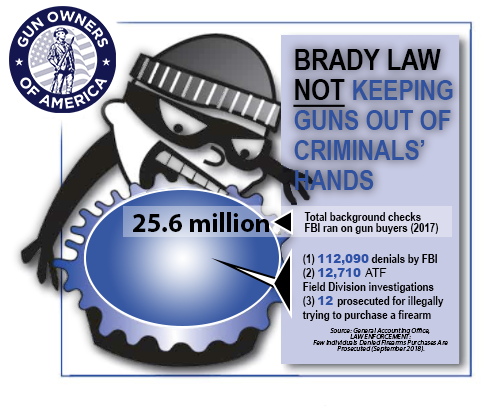 1) Background checks stop the wrong people. Roughly 95% of NICS denials are “false positives,” which means most of the people who are being denied are not the people that want to hold up the neighborhood grocery store.

2) Background checks do not result in bad guys going to jail. In 2017, only 12 people were prosecuted by the U.S. Attorney’s Office for trying to illegally purchase a gun — during a year when more than 25 million background checks were conducted.(1) The Inspector General’s report in 2016 found that the Justice Department only refers an average of 32 prosecutions per year under the Brady Law.  (See page 32 of the audit.)  And in a 2012 DOJ report, only 13 prohibited persons were convicted for trying to illegally purchase a gun — when more than ten million background checks were conducted.

The lack of prosecutions is not surprising, since criminals typically are not stupid enough to use their own name when purchasing a firearm. What typically happens is that good people are denied their Second Amendment rights for outstanding traffic tickets (that result in a bench warrant) … or for having the same name as a bad guy … or for having engaged in a street fight several decades ago.

3) Background checks are used to target innocents. Because of the NICS system, there are now more than 250,000 military veterans who can NOT purchase firearms from a gun dealer — and the Obama Administration tried to disqualify tens of thousands of otherwise law-abiding seniors in similar fashion.

4) Anti-gun politicians use NICS to keep good people disarmed. What if you’re blocked from buying a gun because you’re illegitimately denied by the NICS check?  Well according to USA Today, the Obama administration illegally diverted every single one of its FBI appeal examiners to other duties, making it impossible for the agency to overturn people’s denials and creating a huge backlog.

5) Gun owner registration. Every time a gun dealer contacts the NICS system and a background check is conducted, there is the potential that gun buyers’ names will be retained — despite prohibitions to the contrary.  This data retention and the potential for gun owner registration is a constant concern of gun owners, given the expansive backup system at the FBI.  Not only that, the General Accounting Office found in 2016 that the ATF had illegally retained the names of thousands of gun owners.

6) A right delayed is a right denied. Forcing law-abiding citizens to get “permission” to exercise a constitutionally-protected right can result in harmful delays — and even death. Consider Carol Bowne of New Jersey who tried to get a gun for protection … was forced to wait several weeks during the screening process … and was ultimately stabbed to death by the man she wanted to defend herself against.

Gun control is denying the rights of law-abiding Americans, while not making us any safer.

(1) While there are more prosecutions at the state level, the GAO report indicates that penalties are applied infrequently: “The prosecutors noted that most convictions do not go to trial and are reduced to less severe violations and most of the penalties imposed tend to be probation…. For example, one Virginia prosecutor said that jail sentences are rare.”