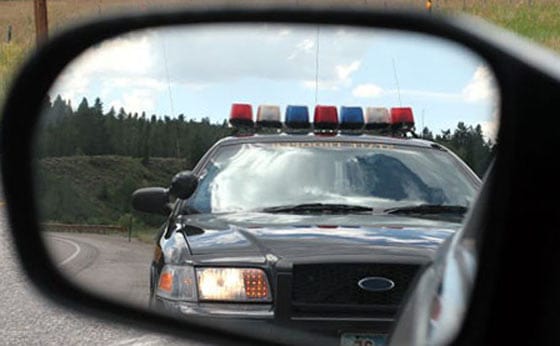 The “Fix NICS Bill” (aka, the “Traffic Ticket Gun Ban”) is being fraudulently sold in Congress as a way to insure that NICS has the names of horrible criminals.

But this is the standard tactic of the “Gun Control Movement” and their allies in the “just enforce the federal gun laws” camp.

How many of the “Bonnie-and-Clyde” type criminals do we really think have been left out of NICS [National Instant Criminal Background Information System]?  If the Sutherland Springs killer was part of an Air Force omission, well, that omission is already being addressed administratively.

And do we honestly think that an initial denial by the NICS system will really stop a committed killer from getting a weapon?  Similar to other killers, the Sandy Hook murderer simply stole the weapons he used.

So, as the states scramble to gobble up their portion of the half a BILLION dollars in bribes that are being offered by the “Fix NICS” bill (H.R. 4477 and S. 2135), what new names are they going to offer up in exchange for the bill’s bribe money?

The Washington Post has reported about how Massachusetts has sent the names of 430,000 people subject to bench warrants to NICS as “fugitives from justice” — frequently as a result of unpaid traffic tickets.

From Speeding to Losing Your Gun Rights

Because some of our members have wondered how an unpaid traffic ticket could land you in NICS, we asked a member of a Massachusetts police force to explain it.  Here is what he told us:

Having arrested people on warrants, let me explain how it works, for parking tickets or anything else for that matter.

A parking ticket or speeding ticket or whatever is issued by a police officer.  The recipient forgets about it — due to vacation, work, family etc. — and after a few months the issuing police department and or court realizes it is unpaid AND the defendant did not respond, i.e. they didn’t plead not guilty or ask for a trial.

At this point the court issues a warrant, usually for failure to appear. When a police officer stops or encounters that person for any reason, and enters their information, name and date of birth into NCIC [National Crime Information Center], the warrant shows up. In some cases the officer does NOT know what the warrant is for and only knows which court issued it.

Regardless, the subject of the warrant is considered a fugitive from justice. (Emphasis added.)

How many Americans know that their unpaid speeding ticket — while traveling out of state (say, on vacation) — could make them a “fugitive from justice”?

And how many know that the SECOND LARGEST CATEGORY of prohibited persons, who are denied firearms by NICS, is “fugitives from justice” — and that a good portion of these ar 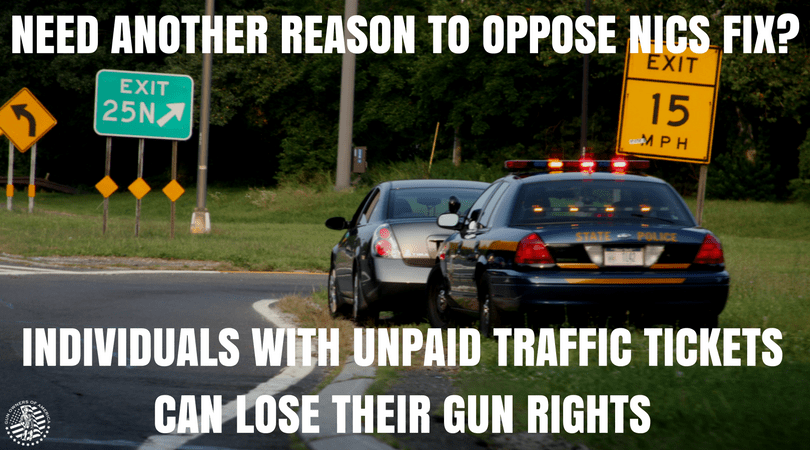 e Americans who have UNPAID TRAFFIC TICKETS from out of state?

At Gun Owners of America, we frequently see gun owners who are denied for no apparent reason — or for the slightest reasons (like traffic offenses):

1) Take Ryan, who was denied a gun purchase by NICS. Upon appealing his denial, he said, “the only thing [my attorney] can find is that i have a bench warrent [sic] from Ohio for failure to appear for a traffic ticket.”

2) Or take this gun buyer who, in posting to a “General Firearms Forum,” said he was denied and, upon appeal, “got a letter in the mail saying I had an outstanding warrant for a traffic ticket out of state from 6 years ago.”

Like these two gun owners, did you know that an outstanding speeding ticket could take away your gun rights?

Gun Owners of America has already produced a Fact Sheet showing how background checks are ineffective, unconstitutional and dangerous.

For instance, one of the problems with the NICS system is that roughly 95% of NICS denials are “false positives,” which means most of the people who are being denied are not the people that want to hold up the neighborhood grocery store.

Sounds incredible, you say?  Well, consider that for the last year on record, only 13 prohibited persons were convicted for trying to illegally purchase a gun — when more than ten million guns were sold.  And the Inspector General’s report in 2016 found that the Justice Department only refers an average of 32 prosecutions per year under the Brady Law.  (See page 32 of the audit.)

Also in 2016, the ATF retrieved more than 4,000 firearms from gun buyers who the agency later determined should have been blocked by NICS.  Amazingly, an ATF report concluded that:

This is not surprising, since it’s good people who are frequently denied their Second Amendment rights by the NICS system for the flimsiest of reasons.  Consider:

* Military veterans, who suffer from PTSD and who have guardians handling their finances, are flat-out denied by NICS.

* Senior citizens, who despite serving their country honorably in the military, are prevented from buying guns because of misdemeanors from their teenage years.

* And then there’s upstanding Americans, like CA Sheriff John Lopey, who have no idea why they are denied a gun purchase by NICS.

The last example is comical.  Sheriff Lopey carries a gun for a living, has served honorably in the armed forces and has never committed a crime.  But he was not allowed to purchase a gun for himself.

The Massachusetts officer, quoted above, has observed that regardless of the seriousness of the original infraction:

If there is a separate charge of failure to appear, it is the failure to appear charge that is potentially more serious than the speeding ticket because now, a person has an arrest record that they didn’t have before.  In Massachusetts, these records stay in the “system” forever because there is no expungement or annulment statute. That arrest record will follow them for the rest of their lives.

Well, guess what?  Massachusetts simply responded by resubmitting the names as persons subject to a gun ban as a result of a “state prohibitor.”

So in other words, those bench warrants for unpaid traffic tickets (aka, fugitives from justice) will still be in the NICS system — just under another category.

Gun grabbers are constantly trying to ban or disarm as many decent gun owners as possible.

Take Massachusetts’ Attorney General, Maura Healey.  She hates guns and has broken the law in order to ban them — in her quest to run for governor.  And it’s her state that has disarmed more than 400,000 people by reporting unpaid fines and unanswered bench warrants.

Lots of other states have crazy anti-gun AG’s as well. So how long will it take for New York, California, Connecticut, Virginia, and over a dozen other virulently anti-gun states to follow Massachusetts’ lead — particularly when faced with a half billion dollars in bribe money under “Fix NICS”?

Don’t be fooled by legislators who say they want to expand NICS to reach hard-core criminals, but at the same time, their efforts will result in the disarming of more decent Americans.

GOA on CCR in House