In a recent report, ATF admitted to Congress that it maintains nearly a billion gun and gun owner records.

But the agency’s own admission didn’t stop Facebook and USA Today from teaming up to “Fact Check” and censor this news which has shocked the Second Amendment community in recent weeks. 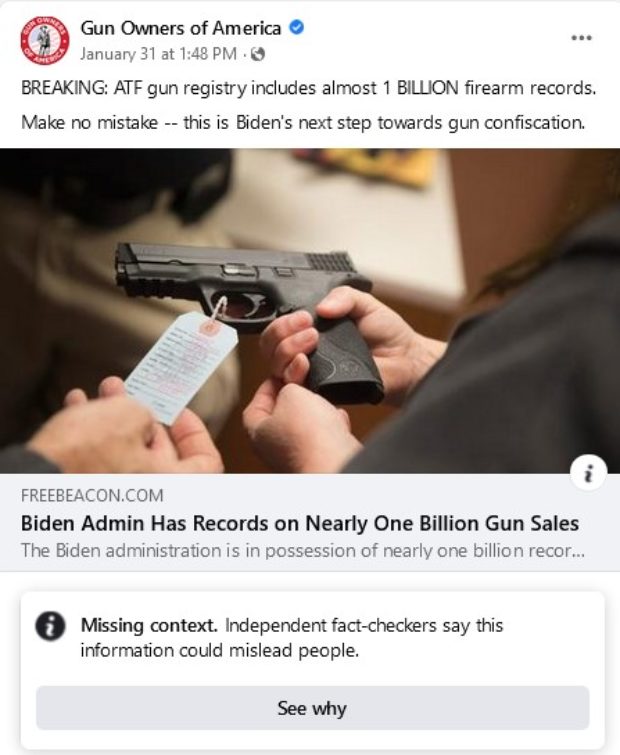 The average Facebook user might now be inclined to click the link “see why,” which redirects to a so-called “Fact Check” article from USA Today—rather than the full story from its original source.

Indeed, by trusting in Facebook and USA Today, an individual is likely to walk away with the understanding that there is no searchable federal database or registry of guns or their owners, and that the ATF has only a few hundred thousand such records. Neither of those understandings is correct.

On the contrary, it is objective fact that ATF admitted to lawmakers that it is currently maintaining a searchable database of nearly one billion firearm transaction records which includes personally identifying gun owner information. This is precisely what gun owners are concerned about when they voice opposition to a national gun registry.

Leading up to the 2020 election, Gun Owners of America similarly was censored by Facebook, working with the French government, to cover up our reporting of the fact that Kamala Harris opposes the individual right to keep and bear arms. Facebook went so far as to label as “fake news” a link to the Harris amicus brief which she filed in opposition to that individual right in the landmark Second Amendment D.C. v. Heller case.

Similarly to Facebook’s censorship of GOA in 2020, this USA Today hit piece is itself full of false and unsubstantiated claims.

USA Today first claims that ATF’s out-of-business records, even though digitized and scanned into a centralized computer system, do not amount to a “searchable database.”

ATF’s out-of-business records are collected and maintained in an organized format, both digitally and physically, at the ATF’s Out-of-Business Records Center. ATF’s National Tracing Center then uses this registry to conduct what ATF calls Record Search Requests to identify personal identifying information to ostensibly “trace” (i.e., search for) guns used in crime.

USA Today’s own sources disprove its own claim that there is no “searchable database.” April Langwell, chief of the ATF’s public affairs division, refers to “searching for records” and UCLA Professor Adam Winkler states “[t]here is a database.”

In other words, ATF maintains a database that it routinely searches but, in five instances USA Today claims this is “not … a searchable database.” GOA rates this claim as FALSE.

False Claim – ATF’s Records Do Not Constitute A Prohibited “Registry”

Next, USA Today claims at least six different ways that ATF’s out-of-business “records are not stored in… a format consistent with a [gun] registry.”

What’s more, ATF in the past has been specifically cited for violating federal prohibitions on creating a centralized database, as recently as a 2016 Government Accountability Office report. As GOA has explained, federal law both prohibits the creation of a registry of guns or gun owners, but also allows ATF to receive records when a gun store goes out of business. It is GOA’s valid legal interpretation that ATF’s decision to collect personally identifying gun and gun owner information and maintain it in a searchable database violates this statute of federal law.

Based on the entirely unsubstantiated nature of USA Today’s claims that ATF is not maintaining a prohibited gun registry, in addition to the numerous pieces of evidence showing that ATF’s database has crossed the line into an illegal registry, Gun Owners of America rates this claim as FALSE.

Missing Context – ATF Has “Hundreds of Thousands” Of Records

Indeed, the actual number of records maintained by the ATF is several orders of magnitude greater. To quote the ATF:

In total, ATF manages 920,664,765 OBR as of November 2021. This includes digital and an estimated number of hard copy records that are awaiting image conversion. It is currently estimated that 865,787,086 of those records are in digitalized format.

Based on ATF’s own statement that it manages nearly a BILLION out-of-business records, Gun Owners of America rates USA Today’s claim as MISSING CONTEXT.

Similar to the misleading claim above, one of USA Today’s experts misleadingly claims that ATF’s out-of-business records database “includes names of the purchasers of guns used in crime.” Again, while this is technically true (the database does contain that information), the database in fact contains far more than that; it includes information about hundreds of millions of guns that were never used in crime and many tens of millions of gun owners who have never committed a crime. Due to the inherently misleading nature of USA Today’s claim, Gun Owners of America rates it as MISSING CONTEXT.

Missing Context – NRA Says There Is No Federal Gun Registry

Next, USA Today quotes an NRA fact sheet from 2016 claiming:“[t]here is no universal gun registration or licensing requirement for individuals at the federal level” to undermine GOA’s comments about recent breaking news.

Once again, this claim is highly misleading, as it does not represent the NRA’s most recent statements on the issue. The NRA has recently commented that the discovery of ATF’s vast out-of-business “database” is “understandably concern[ing]” and that “the records maintained by ATF could facilitate gun confiscation.”

Missing Context – ATF Records Can Only Be Accessed During Criminal Investigations

On four occasions, the USA Today article claims out-of-business records “may only be accessed individually to assist in criminal investigations.”

However, ATF’s website provides a process by which a “private citizen needing to obtain the serial number of a stolen firearm purchased from an FFL which has since discontinued business.” Further, the website reveals that ATF runs traces for any “bona fide criminal investigation,” meaning ATF assumes all trace requests are submitted pursuant to federal law in good faith rather than by authenticating each request.

Based on publicly available information regarding ATF’s Record Search Request (RSR) Program, Gun Owners of America rates the claim that “ATF can only access the records if a law enforcement agency asks for help tracing a gun linked to a crime” as MISSING CONTEXT.

Aidan Johnston is the Director of Federal Affairs for Gun Owners of America, a nonprofit grassroots lobbying organization dedicated to protecting the right to keep and bear arms without compromise. GOA represents over two million members and activists, and can be found at www.gunowners.org. You can follow Aidan on Twitter @RealGunLobbyist. Click here to join Gun Owners of America.

This article was originally published by the Daily Caller.