ATF Has Nearly 1 BILLION Records in a Registry

Today, GOA needs you to take action to stop ATF from continuing to build out a national gun registry.

GOA’s Prior Investigation into ATF’s Registry 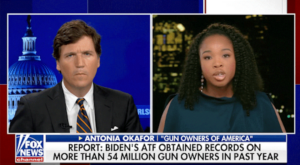 You can watch Antonia’s interview with Tucker Carlson here, on GOA’s YouTube Channel.

Back in November of 2021, GOA uncovered internal documents showing that ATF had processed over 54 MILLION firearm transaction records (Form 4473s) into a national database in just the last year.

The news rightfully shocked the nation—and GOA’s Antonia Okafor even went on Tucker Carlson’s show to discuss it.

After our story broke, Gun Owners of America worked with Representative Michael Cloud (TX-27) to launch an investigation into 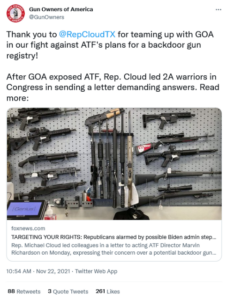 Representative Cloud led 51 other pro-gun members of Congress demanded accountability from ATF, asking: How many records does the ATF’s Out-of-Business Records Center (OOB) have in total?

Unable to hide the truth any longer, ATF was forced to respond:

In total, ATF manages 920,664,765 OBR as of November 2021. This includes digital and an estimated number of hard copy records that are awaiting image conversion. It is currently estimated that 865,787,086 of those records are in digitalized format.

This violates the prohibition on a national gun registry in existing law.

Gun Owners of America WILL NOT STAND for it.

That’s why we need you to take action IMMEDIATELY!

The Bureau of Alcohol, Tobacco, Firearms, and Explosives has NO BUSINESS maintaining a gun registry with NEARLY ONE BILLION RECORDS of Americans’ guns and their purchasers.

Deleting this gun registry and making sure the laws prohibiting ATF from creating a registry of guns or gun owners are enforced is now one of GOA’s top priorities.

Biden is Expanding this Registry

Make no mistake—this is clear evidence that a partial national gun registry exists. 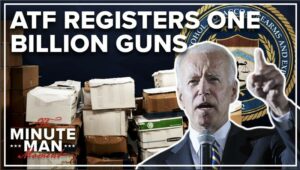 Watch GOA’s report on ATF’s one billion record gun registry on the latest episode of the Minuteman Moment!

And if that isn’t bad enough, the Biden Administration wants to expand and complete the registry.

Back in June, GOA pointed out that hidden in the Biden Administration’s Proposed Definition of ‘Frame or Receiver’ and Identification of Firearms was a little-noticed provision relating to Out-of-Business FFLs.

Essentially, Biden is proposing that FFLs maintain Form 4473 records FOREVER, instead of only maintaining records for the last 20 years.

If the American people don’t stand up for their rights now, Biden’s anti-gun ATF will be able to track gun owners, infringe on our rights, and potentially even confiscate our firearms.

Democrats Want to Reward ATF by Doubling its Budget

How dare an agency responsible for infringing on the constitutionally protected rights of the people be rewarded for such behavior!

Congress should not appropriate a DIME for this agency—and certainly not while it is actively maintaining a gun registry in violation of federal law.

Reportedly, this is on Sen. Schumer’s “front burner” and he plans to secure the funding as early as this week, so it is of the utmost importance that you take action immediately.

What can you do about it?

This billion-record gun registry must be dismantled.

It’s going to take time and effort—not only from GOA’s team in Washington D.C. but also from our grassroots members like you.

Today, we need you to take action—email your Congressman and Senators and demand they stop this madness right now.

But don’t stop there!

We need you to spread the message in your local community.

To help us get the message out you can:

Your friends, your family, and some or all of their firearms may already be in this national registry!

Then, we need everyone to call Congress and demand this registry be deleted.

You can call the United States Capitol switchboard at (202) 224-3121 and an operator will connect you to your elected representatives.

Big government has the advantage over gun owners as individuals, but together we can beat the ATF and delete this registry!

With the collective voice of all gun owners demanding these records be permanently purged from ATF’s database, your elected representatives will have to take a stand.

If you do your part, we’ll do ours.

Keep up the pressure, and our team of dedicated lobbyists will do everything in our power to force Congress to vote and undo this madness.

Biden Admin Has Records on Nearly One Billion Gun Sales