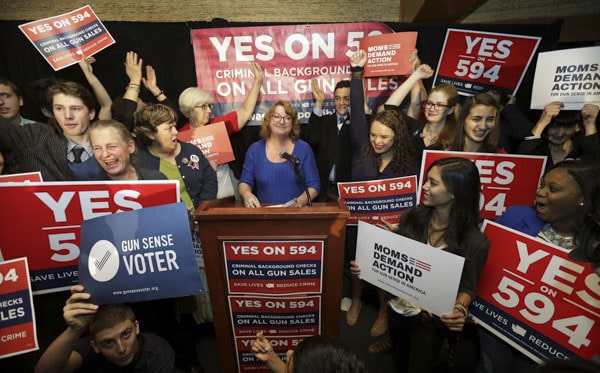 Numerous members of TTAG’s Armed Intelligentsia chimed-in on the CapArms Question of the Day: What’s Wrong With Universal Background Checks? My turn . . .

There are three major concerns regarding UBCs. First and foremost is, of course, the fact that the freedom to own and carry the weapon of your choice is a natural, fundamental, and inalienable human, individual, civil and Constitutional right — subject neither to the democratic process nor to arguments grounded in social utility.

The freedom to own must necessarily include the right to purchase. There is no other fundamental right in the Constitution which any court in the country would allow to be subjected to background checks. Think about it:

My second major reason for opposing UBCs: the antis are never satisfied. Whatever “common sense” restrictions on Second Amendment rights they manage to pass, it’s just a “good first step.” Their job is never finished (and won’t be) until they achieve full and complete civilian disarmament.

Lest someone out there accuse me of slippery slope-ism, let me remind you what happened in New York State back in 2011 (complete story here) a decade after New York State passed their UBC law.

That may sound reasonable, unless you dig into the meat of the story and discover that those “unlawful sellers” were actually show attendees, not dealers, and that the gun show operators had meticulously followed New York’s UBC law. They had signs posted at all entrances, at all ticket sale locations and at least four places within the show to make sure that everyone knew the law.

Read at The Truth About Guns

Mom pulls out guns to chase off 5 suspected burglars