VA: Back door gun ban is up for a vote today in Richmond!

Hopefully, you are sitting down as you read this!

Two gun-control bills that will allow local government to write their own gun restrictions are still alive in the General Assembly! 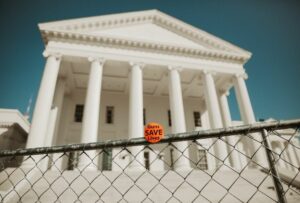 HB 421, provides that: “A locality may adopt or enforce any ordinance, resolution, or motion, governing the possession, carrying, storage, or transporting of firearms, ammunition, or components or combination thereof in such locality.”

This means local Supervisors and City Councils could criminalize the mere possession of a single .22 caliber long rifle bullet, with up to a year in jail for violations!

Some objected to granting such power to local governments during the House of Delegates debate. The January 30, 2020 Washington Post noted Delegate Price said her bill, “would allow for any locality to not enact ordinances related to firearms.” It will also allow localities to enact gun confiscation!

HB 421 could even allow a local government to criminalize carrying a concealed firearm even by those who hold permits!

In one jurisdiction, concealed carry could be legal … in the next, you could be arrested for possessing a firearm. If you try to transport a concealed firearm to another locality that restricts such firearms, you could end up in jail for a year. How will Virginians possibly keep track of which localities passed which ordinances?

HB 421 really amounts to a local “Assault Weapons” ban! Even possessing a small part of a firearm, like a recoil spring, could land Virginians in jail up to a year if the locality passed such

an ordinance. How Governor Northam could possibly call this kaleidoscope of conflicting ordinances “common sense gun control” is beyond us!

There are 133 counties and cities in Virginia and 190 incorporated towns. If each had a different policy on firearms or ammunition, can you imagine the legal nightmare it would create? Gun controllers like Governor Northam and Mayor Bloomberg apparently want to create as much confusion as possible to ensure we cannot defend ourselves! Their real goal is the complete disarmament of all civilians.

Another bill, SB 35, authorizes a locality to “adopt an ordinance that prohibits the possession, carrying, or transportation of any firearms, ammunition, or components or combination thereof” in public buildings, parks or streets and areas where a permitted event takes place.

This bill appears directed at concealed carry holders! Again, violations carry up to a year in jail!

SB 35 was introduced by Senator Surovell (D), who wrote on January 22, 2020 on his Dixie Pig Blog: “I do not support civilian ownership of weapons of war that are unnecessary for hunting or self-protection.”

The bottom line is that both HB 421 and SB 35 will allow local governments to sue local FFL dealers over firearms and ammunition sales to the public. Such litigation could drive these businesses out of state or out of business!

You can see why we are constantly encouraging Second Amendment supporters to convince our like-minded friends to register to vote! The Left has been diligent about registering new voters who think like them for the past few years.

Unless we match their efforts, we will be in the position of having our gun rights weakened. We will need to constantly be on guard and fight to preserve our rights unless we elect those who support our Second Amendment.

We don’t have to tell you that our opponents are determined and very well-funded by gun-confiscating billionaires! Leftists are fomenting a real revolution against the values our Founders risked their lives to uphold!

Please use our pre-written message to urge your delegate and senator to vote NO on HB 421 and SB 35.

And follow this up with a phone call if you can spare the time. Again, you can determine who is your Delegate & Senator and what their phone numbers are, click here.