Could Bloomberg spell the end of the 2A?

Help send a message that our 2A-protected rights are “not for sale.” Order your bumper stickers today and fight back against Bloomberg’s buying of America!

Describing what Bloomberg views as a profile of murderers, Megabucks Mike argued that killers “… fit one M.O. You can just take the description, Xerox it, and pass it to all the cops.  They are male, minorities, 16 to 25.” 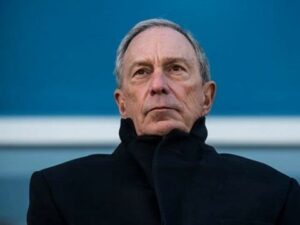 His solution? According to Megabucks Mike:

“The way you get the guns out of the kids’ hands [that is, those who are 16-25] is to throw them up against the walls and frisk them.”

Welcome to Megabucks Mike’s Orwellian future, where people are seized without probable cause for the purpose of gun confiscation on the basis of stereotypes.

Yesterday, it was black youths, but tomorrow it will be pro-gun “bitter clingers.”

And what does “Megabucks Mike” have to say about this?

After increasing warrantless searches by 7-fold during his administration, Bloomberg supposedly renounced his entire record — about one second before he announced his run for the presidency.

You may remember that Bloomberg has aggressively tried to bring his anti-gun fascism not only to New York City, but also to pro-gun states:

And now Bloomberg is trying to use his $64 billion fortune in order to buy America — so that he can use the Constitution for toilet paper, as he sits on his golden toilet.

If you agree, we have prepared a bumper sticker which says, “America is not for sale.”

VA: Back door gun ban is up for a vote today in Richmond!