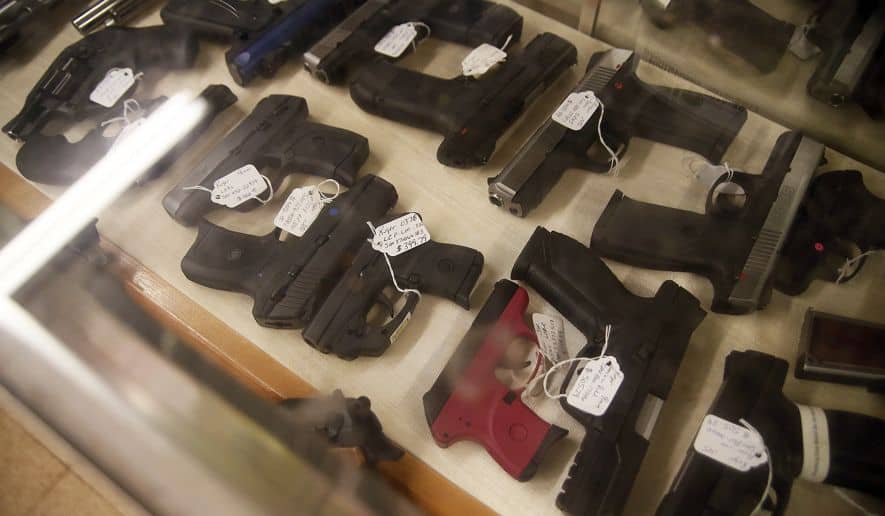 It shouldn’t be a surprise that gun sales are still skyrocketing, said Erich Pratt, executive director of Gun Owners of America, who also drew a connection to the recent attacks.

Gun purchase background checks soared to a record for the month of May, snapping a five-month streak of year-over-year declines since President Trump was elected, and suggesting the demand for guns is once again picking up amid world tumult.

More than 1.9 million checks were run through the federal government’s database in May, which is an increase of about 70,000 from the previous May.

The numbers helped to dispel worries about a post-Obama “Trump slump” in gun sales, with the National Shooting Sports Foundation, an industry group, saying their own calculations of data from the National Instant Criminal Background Check System suggest a healthy market.

“We did see a decline in the adjusted NICS numbers after the election,” said Lawrence G. Keane, senior vice president and general counsel for the NSSF. “As we’ve always said, those spikes in demand that are driven by political concerns last for a period of time, but eventually they subside and you return to a more normalized market, and that’s what’s occurred.”

May also saw a significant amount of chaos overseas, including the deadly terrorist attack in Manchester, England. On May 22 attacker Salman Abedi killed 22 people and injured scores of others in a suicide bombing attack outside an Ariana Grande concert in the British city — an attack for which the Islamic State terrorist group later claimed credit.

Such attacks can have a spillover effect on the gun market, Mr. Keane said.

“It was more pronounced after, for example, San Bernardino and Orlando,” he said. “But we saw increases after the attack in Paris, so that can be a factor. It’s more pronounced when something occurs domestically.”

It shouldn’t be a surprise that gun sales are still skyrocketing, said Erich Pratt, executive director of Gun Owners of America, who also drew a connection to the recent attacks.

“And each terror attack reminds Americans once again that they themselves are the ones who are ultimately responsible for their safety,” he said.

Indicators had suggested a slide in interest in gun purchases in the wake of last year’s election. After 19 straight months of increases over the previous year’s figures, the number of background checks being performed — a rough approximation for sales — slid in December, and that continued through the first few months of this year.

Gun control advocates, however, appeared more concerned after Mr. Trump brought guns into the debate following the deadly London terrorist attack over the weekend, when seven were killed and dozens wounded.

“Do you notice we are not having a gun debate right now? That’s because they used knives and a truck!” the president tweeted early Sunday morning of the attackers.

Read at The Washington Times