Please click on the Take Action button to urge your senators to support Brett Kavanaugh’s confirmation to the U.S. Supreme Court. Tell them that Kavanaugh will be a HUGE improvement over the retiring Anthony Kennedy.

The Anti-gun Left is Apoplectic Over the Brett Kavanaugh Nomination 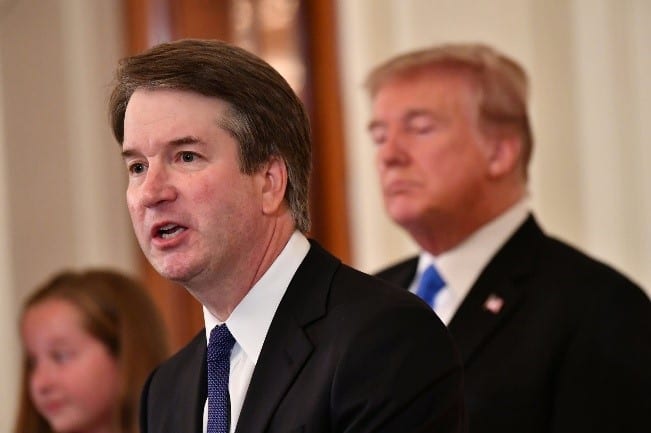 Democrat Senator Chris Murphy of Connecticut is symptomatic of the wailing and gnashing of teeth that is occurring today. Murphy tweeted last night:

Brett Kavanaugh is a true Second Amendment radical. He believes assault weapon bans are unconstitutional, a position way out of the judicial mainstream, far to the right of even late Justice Scalia.

Actually, Sen. Murphy is right about one thing. Early analysis (using a liberal-conservative scale) indicates that Kavanaugh is to the right of Scalia — and even to the right of Justice Neil Gorsuch.

There is no doubt that Kavanaugh is pro-gun and will be a HUGE improvement over Anthony Kennedy, whom he is replacing..

This is not to say that he is the most pro-gun of the finalists.

That would have been Third Circuit Judge Thomas Hardiman, who seemed prepared to rule that the only legitimate limits on the Second Amendment are laws that existed at the time of the Founders.

Nevertheless, Kavanaugh, in his most important gun-related decision (Heller II) filed a dissent arguing that D.C.’s ban on semi-automatic firearms was arbitrary and unlawful.

In fact, his dissent was so well argued that GOA’s subsequent legal briefs have repeatedly held up his dissent as the model to follow.

In another case, Kavanaugh correctly interpreted the Firearm Owners Protection Act to find that a defendant could not be sentenced to 30 years in prison for use of a fully-automatic firearm if he was unaware that the gun fired automatically.

Kavanaugh also supported the prevailing opinion in the Citizens United case, which affirmed GOA’s voice in the political arena.

No doubt, constitutionalists are bound to find some opinion that they will disagree with. No justice is perfect. Consider: There is near unanimous agreement that Clarence Thomas is the most conservative justice on the Supreme Court, and yet, even Justice Antonin Scalia — as good as he was — was to the left of Justice Clarence Thomas.

All said, given Kavanaugh’s pro-gun vote in Heller II, we need to look at his record carefully and shouldn’t nitpick on issues which doesn’t directly relate to guns.

So I’ll say it again. Judge Brett Kavanaugh is a HUGE improvement over Kennedy.

Remember page 54 of the Heller decision — where there was dicta stating that certain gun control laws could be consistent with the Second Amendment?

Legal scholars have uncovered that this page was the price for “buying” Anthony Kennedy’s vote — and getting a 5-4 majority on Heller.

Now he’s gone. And his exit is not lamented by any of us.

Thankfully, it looks as though we have a real chance for the Court to revisit the Second Amendment — and actually hand down future decisions that will begin to dismantle the unconstitutional laws which are on the books.

So please urge your Senators to support the nomination of Brett Kavanaugh for the U.S. Supreme Court.