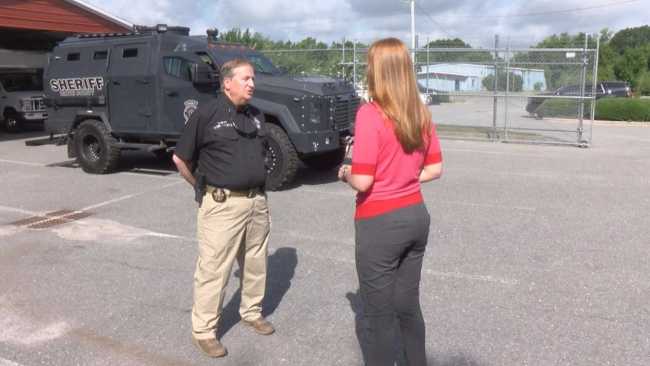 As the General Assembly discusses a bill that would make several changes to the state’s gun laws, Wayne County’s Sheriff wonders how exactly it will impact them – especially when it comes to funding for the Sheriff’s Office.

“The frame of mind that everybody who sits in this truck feels safe is priceless,” said Hatch.

The Nemesis has been in service for about six weeks, and has seen use on one call in which weapons were believed to be involved.

Before the Nemesis, Wayne County had to rely on other localities for help in dangerous situations.

“We have a window of about two to three hours between realizing that we actually needed an armored vehicle, requesting same, and then waiting for it to actually arrive on scene,” said Hatch.

The truck was partly funded by concealed carry permit applications. Wayne County had about 1,700 last year, bringing in more than $140,000.

“Half of which went to the SBI for their part, the other half came back to the Sheriff’s Office for our use,” explained Sheriff Larry Pierce.

Pierce has more than one objection to House Bill 746, that in many cases would eliminate the requirement to have a permit to carry a concealed gun.

“I still think they need a safety class prior to being able to carry a handgun in public,” said Pierce.

He’s also afraid the bill would take away the funding they receive from permits.