Want to stop mass shootings? Let’s get more guns in the right hands

Want to stop mass shootings? Let’s get more guns in the right hands 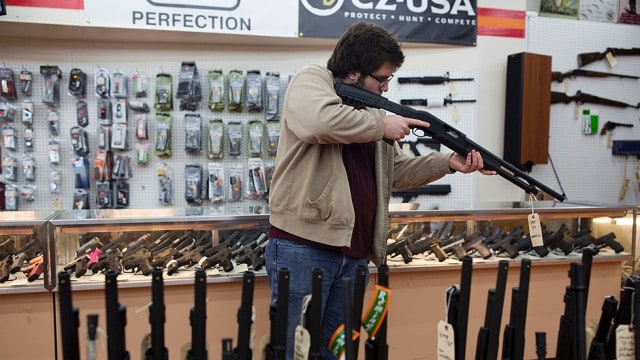 The recent mass murders on London Bridge ended eight minutes after they began, when armed English police officers arrived and shot the killers. Other police officers, who had batons but not firearms, happened to be near the scene when the attack began. Some of them fled, according to an eyewitness account published in The Guardian. Another officer bravely used his baton against the multiple men with knives, incurring severe injury. Some people threw chairs at the assailants. One man heroically fought the terrorists with his bare hands, despite being stabbed repeatedly.

For defense against a murderous attack, batons and chairs are better than nothing, but not nearly as effective as a firearm. The fact of the matter is that more firearms in the right hands mean fewer deaths from mass attacks.

In the United States as in the United Kingdom, the casualty count often depends on the time it takes for the first armed defender to arrive. At London Bridge, that was eight minutes. In December 2012, at Sandy Hook Elementary School in Newtown, Connecticut, armed police entered the school in less than six minutes, by which time 26 students and teachers were dead.

One year later, at Arapahoe High School, in the Denver suburbs, a would-be mass-killer’s attack ended eighty seconds after it began. Fortunately, an Arapahoe County Sheriff’s Deputy was already stationed at the school, and he immediately rushed into action. One student was killed, many fewer than the criminal had intended.

Mass killers often select targets because of the absence of armed defenders at the scene. The Aurora theater murderer selected a “gun-free” theater, which forbade licensed handgun carry by its patrons. He had chosen not to attack an airport because of “substantial security.” The Santa Barbara murderer decided against attempting a massacre at a public Halloween party because “there were too many cops” and “one gunshot from a cop will end everything.” The Charleston church murderer abandoned his original target, the College of Charleston, “because of the security.” The Los Angeles Jewish Community Center murderer passed on three other Jewish institutions because the “security was too tight.” In Detroit, a would-be ISIS murderer, who was stopped before he could execute his plan, targeted a large church since “people are not allowed to carry guns in church.”

The United Kingdom could reduce the toll of terrorist attacks by arming and training all police officers, instead of just a select few. The result would be more jihadis stopped after 80 seconds instead of 480 seconds—a life or death difference.

In the United States, almost all police officers and sheriffs’ deputies are armed. But they cannot be everywhere at once. In many rural counties, a Sheriff’s Office may have fewer than a dozen deputies to cover hundreds of square miles. The response time to send a deputy to a rural elementary school can be half an hour or more.

Accordingly, more American schoolteachers are recognizing that they must be their own first responders—to defend themselves and the children entrusted to their care. Since 1995 in Utah, every public school teacher with a concealed handgun carry permit has been allowed to carry at school when teaching.

In those 22 years, there has been one incident of firearms misconduct by a teacher. In 2014, a teacher who failed to follow the standard safety rules caused an accidental discharge that struck a toilet. There have been no instances of teachers angrily shooting students, or students stealing guns from teachers. By coincidence or not, there have been no mass attacks on Utah schools.