Shannon: Virginia a preview of what gun-grabbers would do nationally

Gun owners are right to be concerned. This isn’t the anodyne “common sense gun regulation” that is so innocent during the campaign. It’s always different after they win. 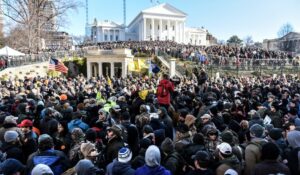 A surprising development is occurring among staunch members of the left at The Washington Post and elsewhere.

Only I need to clarify. The WoePost wasn’t condemning sanctuaries that protect illegal aliens from richly deserved punishment. It was condemning the new Second Amendment sanctuaries protecting the constitutional rights of law-abiding citizens from undeserved collective punishment.

That’s because the extra-legal selective law enforcement the left uses to protect people who have no right to be here is out of bounds for citizens to use to protect rights granted them at the founding of the nation.

And that’s not the only contrast. Illegal alien sanctuaries are imposed on an electorate from the top down to protect a pool of future leftist voters. The Second Amendment sanctuary movement is a grassroots effort that petitioned elected officials to protect constitutional rights and the officials responded.

Even the WoePost admits the “movement has driven throngs of people to show up at boards of supervisor’s meetings. Their numbers are remarkable – 400, 800, even 2,000 in attendance.” As this is written over 110 Virginia counties, cities and towns have passed some form of Second Amendment sanctuary resolution that says that jurisdiction will not enforce or impose unconstitutional gun ownership restrictions on its residents.

Gun Owners of America Senior Vice President Erich Pratt has one of the best explanations of the Second Amendment sanctuary movement, “Sanctuary resolutions are important because they provide the best way for local officials to inform the newly elected General Assembly and the governor that if they rush forward to create new felony crimes to jail law-abiding Virginians – just for exercising their most fundamental and natural right of self-defense – then they cannot expect localities to enforce such unjust laws.”…