A Fox News guest said Tuesday morning that the conduct she saw when she attended the pro–Second Amendment rally in Richmond, Virginia, on Monday was evidence that Martin Luther King Jr.’s dream of harmony among people of different races had “become reality.” 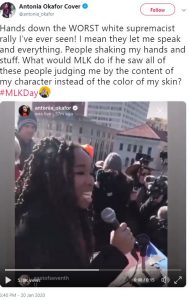 The guest, who appeared on the morning show Fox & Friends, was Antonia Okafor Cover, the director of outreach for the Gun Owners of America, a nonprofit that promotes gun rights.

The rally was held to protest pending gun control measures from Virginia’s Democratic governor, Ralph Northam, and the majority-Democratic Legislature. As Newsweek reported, it drew thousands of armed protesters from across the state and elsewhere…

“This was, by far, hands down the worst white supremacist rally I’ve ever seen,” she said with a chuckle. “There were people shaking my hand. I mean, they even let me speak, for goodness’ sake. There were over 20,000 people there. So it’s almost as if MLK’s dream to see that people judge people based on the content of their character and not the color of their skin has actually become reality.”

Okafor’s remarks on Fox News were similar to a tweet she posted on Monday after the Richmond rally had concluded. Attached to the tweet was a video clip of Okafor speaking to a crowd.

“What would MLK do if he saw all of these people judging me by the content of my character instead of the color of my skin?” she asked in the tweet, rhetorically…

Shannon: Virginia a preview of what gun-grabbers would do nationally