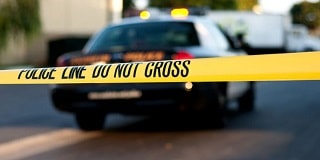 Indianapolis police say 34-year-old Percy Walker kicked in the wrong door and was shot and killed by a father protecting two young children.

The incident occurred during the night.

According to CBS 4, police indicate that Walker literally kicked down the front door of the apartment, then rushed inside. Indianapolis Metropolitan Police officer Aaron Hamer said, “It appears he was yelling to get into the residence because he believed his kids were in the house. It turns out the kids inside did not belong to him.”

The resident of the apartment — a father with a two-year-old and a four-year-old — opened fire on Walker, fatally wounding him.

Hamer indicates that the resident warned Walker that he had the wrong apartment before he kicked in the door. Walker’s ex-wife and his children live in the same apartment complex but are in a different building.