Stand for the 2nd Amendment on Nov. 5 by Voting for Maj Toure for At-Large City Councilman

The elections in Philadelphia are quickly approaching, and with them is the chance to elect a strong defender of the Second Amendment to the City Council, Maj Toure. 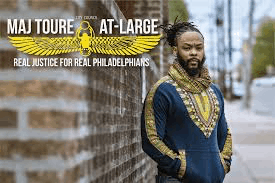 Anyone familiar with Gun Owners of America is likely familiar with Maj Toure, a strong advocate for the right to keep and bear arms, as well as the founder of Black Guns Matter.

With the City Council in Philadelphia being overwhelmingly Democrat, the possibility of having Maj Toure, a self-described Solutionary Libertarian, would be a major win for those wanting to defend their rights in the city.

As a native of the city, Toure has the best interests of his fellow Philadelphians in mind, and as shown through his founding and work with Black Guns Matter, is more than willing to go to bat for our rights.

Election Day is quickly approaching, so it is imperative that you get out and vote for Maj Toure on November 5th for At-Large City Councilman.

We cannot afford for any gun owner to sit at home and not be active during this election. Democrats have a 7 to 1 voter registration advantage, so every single vote on our side is vital.

Please remember to vote on November 5th, 2019 and ensure that another anti-gun candidate does not make it on the City Council.

If you need to find your voting location, click here.​