Great News!  Maj Toure, the GOA-endorsed candidate for Philadelphia City Council, is officially on the ballot for the November, 2019, general election. 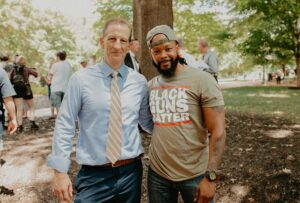 Maj is the founder of Black Guns Matter.

He is sticking up for the Second Amendment rights of all Philadelphians, especially those in urban areas.

Maj isn’t afraid to reveal the racist roots of gun control: “If you are in support of the racist practice of gun control, you are no longer fit to serve,”  stated Maj at the 2nd Amendment rally in Harrisburg on May 6th.  Please watch the video of some of his rally comments.

As the Pennsylvania Director for Gun Owners of America, I don’t need to tell you that Maj will bring much-needed change to Philadelphia politics and will be a strong voice to end the anti-gun bias on the City Council.

But Maj needs your help. He is facing an uphill battle against the entrenched, anti-liberty cabal that is enshrined in the “City of Brotherly Love.”

So, please donate to Maj’s campaign and volunteer to help him win.

As a native son of this Commonwealth, I cannot think of a more important local election that all Pennsylvanians should support with their time, talent, and treasure.

Privileged Billionaires Are Gunning For Your Second Amendment Rights