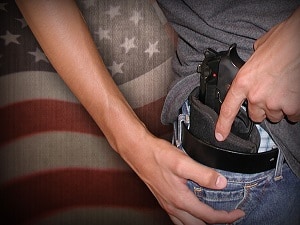 A week shy of one year since oral argument was heard, and over six and a half years since the case was brought in October of 2009, the U.S. Court of Appeals for the Ninth Circuit issued a decision in Peruta v. County of San Diego.  The Peruta case is not the only one challenging California concealed carry laws.  Peruta was consolidated with Richards v. Prieto, a case involving Yolo County, California.  (Additionally, several other similar cases such as Baker v. Kealoha out of Hawaii were stayed by the Ninth Circuit pending resolution of Peruta.)

The case involves a challenge to California’s concealed carry laws.  When the case was brought, California law permitted unloaded open carry, but during the pendency of the case, that right was lost to the people of California.  Therefore, California law now almost completely prevents ordinary people from carrying firearms in public – with the exception of a favored few categories of persons.  The plaintiffs sued the San Diego County sheriff, challenging the state’s “good cause” requirement to obtain a concealed carry license, which, as interpreted by San Diego, requires some very special threat of harm to the applicant.

In federal district court, the trial judge applied “intermediate scrutiny” to the challenged laws, deciding that the right to bear arms must yield to the common good – the “government[‘s] important interest in reducing … the risks to other members of the public.”

The plaintiffs appealed the case to the U.S. Court of Appeals for the Ninth Circuit.  On appeal, Peruta’s lawyers all but conceded that the state may regulate the bearing of arms in public, by prohibiting either concealed carry or open carry, but not both.  They did not seek a ruling that the licensure of concealed carry is per se unconstitutional – only that if the government restricts concealed carry, “‘self-defense’ must be considered a ‘good cause'” to enable a Californian to obtain a concealed carry permit.

In an opinion filed in February 2014, a three-judge panel of the U.S. Court of Appeals for the Ninth Circuit reversed the district court.  Conducting a text, history, and tradition analysis of the scope of the right to “bear arms” outside the home, the panel concluded that the Second Amendment must include the right to bear arms for self-defense outside the home – a small victory for gun rights.

After the panel issued its opinion, the Ninth Circuit was asked to hear the case en banc.  Not wanting to tarnish its perfect record of ruling against the Second Amendment, the Court agreed to hear the case en banc.  Although en banc review typically means consideration by the full court, in the Ninth Circuit, where there are more than 40 judges, that means another panel of 14 judges.

Our firm filed an amicus curiae brief in the case in the Ninth Circuit on behalf of Gun Owners of America, Inc.; Gun Owners Foundation; U.S. Justice Foundation; The Lincoln Institute for Research and Education; The Abraham Lincoln Foundation for Public Policy Research, Inc.; Policy Analysis Center; Institute on the Constitution; and Conservative Legal Defense and Education Fund.

On June 9, 2016, the Ninth Circuit, sitting en banc, ruled 11 to 3 that the Second Amendment right to keep and bear arms does not apply to any law governing the concealed carry of any protected firearm in public.  Accordingly, any law, ranging from an absolute prohibition on concealed carry to the requirement of “good cause” currently in the law – however defined and administered, and whatever exceptions to it there may be – is completely outside the Second Amendment.  In short, with respect to rules governing concealed carry of protected firearms, for self-defense or any other purpose, the civil authorities may do as they please.  Apparently, while there may be constitutional limits to the regulation of concealed firearms in public, they would not be found in the Second Amendment.

How did the Court reach this conclusion?  Easy.  The judges ignored the text of the Second Amendment, relying solely upon a single dictum in Heller, and a misuse of the dictum at that.  The dictum stated:

Like most rights, the right secured by the Second Amendment is not unlimited.  From Blackstone through the 19th century cases, commentators and courts routinely explained that the right was not a right to keep and carry any weapon whatsoever in any manner whatsoever and for whatever purpose[.] … For example, the majority of the 19th-century courts to consider the question held that prohibitions on carrying concealed weapons were lawful under the Second Amendment or state analogues.

From this starting point, the en banc Ninth Circuit – beginning with the year 1299 –  plowed through numerous English monarchical and parliamentary practices against armed men going around in public without a license from the king, concluding from this historical survey that in merry old England, “carrying concealed firearms in public was not allowed by law” (emphasis added).  Capping this historical lesson on arms-bearing, the Court cited the 1689 English Bill of Rights, which declared that “the [English] subjects which are Protestants may have arms for their defence suitable to their conditions, and as allowed by law.”

[W]ith respect to the case now before us, the specific question is whether the arms that are “allowed by law” – that is, the arms Protestants had the right to bear – included concealed firearms.  The history just recounted demonstrates that carrying concealed firearms in public was not “allowed by law.”  Not only was it generally prohibited by the statute of Northampton, but it was specifically forbidden by the statute enacted under Henry VIII, and by later proclamations of Elizabeth I and James I.

According to the en banc Ninth Circuit, then, 21st-century American people have no more rights than the 17th-century English Protestants, even though the English Bill of Rights provides only that the king’s subjects “may have arms for their defence suitable to their conditions, and as allowed by law,” whereas the Second Amendment broadly proclaims that “the right of the People to keep and bear arms shall not be infringed.”

Not once did the Ninth Circuit respect the Second Amendment’s distinctly unique text.  Yet that text, as originally understood, is the very foundation upon which Heller rests.  Had the Ninth Circuit submitted to the Second Amendment text, it could not have concluded, as it did, that laws governing concealed firearms are per se outside the protective shield of the Second Amendment.  After all, unlike the text of the 1689 English Bill of Rights, which extends protection only to “hav[ing] arms for defense,” which could be satisfied by laws that protect possession of firearms, the Second Amendment extends to “keep[ing] and bear[ing] arms,” which secures not only the possession of arms, but also the use of them.  There is, then, no basis whatsoever for the Ninth Circuit en banc ruling – that a certain use (concealed carry) is completely outside the protective shield of a right to both keep and bear firearms.

As the U.S. Supreme Court ruled in Heller, “[a]t the time of the founding, as now, to ‘bear’ means to ‘carry.'”  It is the job of courts to interpret the language of the Constitution, not to ignore it.  But the en banc Ninth Circuit failed in that elementary task.  Its opinion is illegitimate under the Supreme Court’s Heller and McDonald decisions, and as a matter of constitutional law.