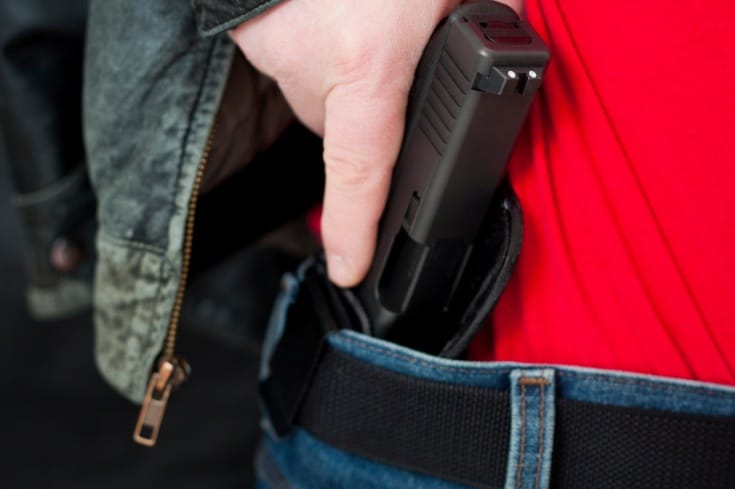 You have no constitutional right to carry a concealed firearm in public.

That’s what the Ninth Circuit Court of Appeals just ruled, by a 7-4 margin, in a case that puts the battle for the next Supreme Court justice into even brighter focus.

Remember, the Supreme Court ruled, in two 5-4 decisions, that the Second Amendment protects an individual right (District of Columbia v. Heller) and that the protection of the right to keep and bears arms applies at the state level as well (McDonald v. City of Chicago).

The recent death of Justice Antonin Scalia would put those and subsequent Second Amendment cases at a 4-4 split, meaning lower court rulings would stand.  And, as we know, almost all lower court rulings are terrible decisions written by rabidly anti-gun judges.

This means that whoever replaces Scalia will tip the balance.

No Concealed Firearms in Public

The Plaintiffs sued the San Diego County Sheriff, challenging the state’s interpretation that the “good cause” requirement to obtain a concealed carry license requires a specific threat of harm to the applicant.  General personal safety doesn’t count, in San Diego’s view.

“We hold that the Second Amendment does not preserve or protect a right of a member of the general public to carry concealed firearms in public,” wrote Judge William A. Fletcher, a President Bill Clinton appointee.

This decision is a reversal of a 2014 Ninth Circuit ruling by a three-judge panel that the Second Amendment “does require that the states permit some form of carry for self-defense outside the home.”

Kamala Harris is currently running for U.S. Senate in California, putting her in a position to vote on the next Supreme Court nominee.

GOA: The Second Amendment is the Standard

Gun Owners of America filed an amicus curiae (friend of the court) brief in the case.  In it, we argue that the Second Amendment is the standard to which gun laws should be held, not the whims and fancies of modern-day judges:

The words “to keep and bear arms” include no words of limitation. They do not describe a right that is subject to “reasonable regulation.” The Second Amendment could have stated “bear arms openly,” or “keep arms within the home,” but it did not.

Absent any such limitation, “keep and bear” must be given their broadest ordinary meaning.  Heller explained, “[a]t the time of the founding, as now, to ‘bear’ meant to ‘carry’”, defining carrying as “‘wear, bear, or carry… upon the person or in the clothing or in a pocket….’”

To ensure against contrary opinions of modern judges who might disagree with the Founders’ principles that the right to bear arms applies inside and outside the home, Heller states unequivocally that this right is “‘for the purpose … of being armed and ready for offensive or defensive action in a case of conflict with another person,’” without regard to place.

The Ninth Circuit Court blatantly ignored the Second Amendment, just as it ignored the Heller decision.

Many in the pro-gun community popped the cork prematurely after the Heller and McDonald.

After all, to live by the court is to die by the court.  The modern view that the courts are endued with superpowers that reach beyond any constitutional limitations has eroded the very purpose of the judicial branch of government.

In an article on the Peruta decision, two of our attorneys write:

It is the job of courts to interpret the language of the Constitution, not to ignore it. But the en banc Ninth Circuit failed in that elementary task.  Its opinion is completely illegitimate under the Supreme Court’s Heller and McDonald decisions, and as a matter of constitutional law.

There is an all-out war against your gun rights in all three branches of government, and GOA is fighting on every front.

Please consider joining GOA in these battles today.  Your contribution of $100, $50, $25, or even $10 will ensure that we have the resources to meet the enemies of freedom head-on.

And there is yet another front where GOA is active, and that is in elections across the country.

The Ninth Circuit case is likely headed to the Supreme Court.  The next president will nominate Justice Scalia’s replacement, and possibly two or three more justices over the course of the presidency.

So GOA is working to elect U.S. Senators who will refuse to confirm ANY judicial nominee who holds your constitutional rights in contempt.