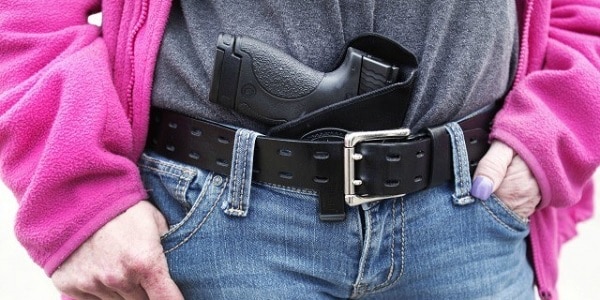 “I am really delighted to have been enlightened by the majority because I missed that part in the Second Amendment that says that, ‘… the right of the people to keep and bear Arms, shall not be infringed.’ Obviously, the copy of the Constitution I have left out that part, unless they’re carrying it concealed in public,” said Gun Owners of America Executive Director Larry Pratt.

A leading gun-rights activist is blasting the liberal Ninth U.S. Circuit Court of Appeals as demonstrating a “totalitarian mindset” after judges there ruled that Americans do not have a constitutional right to carry concealed firearms in public.

The court issued the decision on a 7-4 vote.

“The protection of the Second Amendment – whatever the scope of that protection may be – simply does not extend to the carrying of concealed firearms in public by members of the general public,” read the majority opinion.

That’s news to defenders of the Second Amendment.

“I am really delighted to have been enlightened by the majority because I missed that part in the Second Amendment that says that, ‘… the right of the people to keep and bear Arms, shall not be infringed.’ Obviously, the copy of the Constitution I have left out that part, unless they’re carrying it concealed in public,” said Gun Owners of America Executive Director Larry Pratt.

Would you be prepared to defend yourself and other innocents in a surprise attack? Find out what one courageous churchgoer did to protect others in the DVD: “Shooting Back: The Right and Duty of Self-Defense”

He told WND and Radio America the court’s reasoning ought to alarm all citizens.

“The Ninth Circuit is clearly showing the mentality of a totalitarian mindset,” Pratt said. “They were the very kind of people that our forefathers objected to and sent letters of remonstrance to King George saying, ‘You got it wrong. Stop doing this.’ King George was tone deaf, and we know how that turned out.”

Pratt is also quick to note the same judges who want to restrict firearm possession in public don’t have to worry about their own protection.

“They all have security where they go to work. No problem,” he said. “They’re protected by folks with guns. It’s just the rest of us who don’t seem to matter. And that really sticks in our craw, too.”

The case arrived at the appeals court after multiple California citizens challenged their local sheriffs over an order to demonstrate “good cause” as to why they needed to carry a firearm in public. The same debate is playing out in city politics in Washington, D.C., and other jurisdictions.

On Thursday, the court vigorously defended local authorities demanding “good cause” for gun owners to carry in public.

“Because the Second Amendment does not protect in any degree the right to carry concealed firearms in public, any prohibition or restriction a state may choose to impose on concealed carry – including the requirement of ‘good cause,’ however defined – is necessary allowed by the Amendment,” the ruling stated.

Pratt finds that unconstitutional and repulsive.

“The good cause requirement is really the invitation that’s been given by lawmakers for a long time to the bureaucrats to be as arbitrary as they wish,” said Pratt, suggesting such latitude gives sheriffs and other government officials the ability to grant permission to friends and donors and stalling or refusing on the petitions of others.

“Nobody has good cause in the minds of these bureaucrats because they just don’t like the idea of people carrying guns. Of course, neither did George III,” he said.

Gun Owners of America filed a brief in the case, pointing to data that strongly suggests allowing Americans to carry leads to less crime. Pratt said the evidence is clear.

“In jurisdictions where people are able to carry concealed virtually without any limitation … those are the low-crime areas of our country,” Pratt said.

He said where law-abiding people cannot carry firearms in public is where the daily carnage is found.

“It’s rules and laws like they’re trying to uphold in San Diego that have produced such a wonderful, low-crime area like Chicago,” he said.

Pratt worries that if this ruling were upheld by the Supreme Court it would make criminals out of good people who would continue to carry guns to protect themselves and their families, regardless of what a court says.