I’m sure you’ve heard the news by now.

Evil struck on Sunday morning.  It was the largest shooting massacre on American soil, as 50 people were gunned down at an Orlando bar. 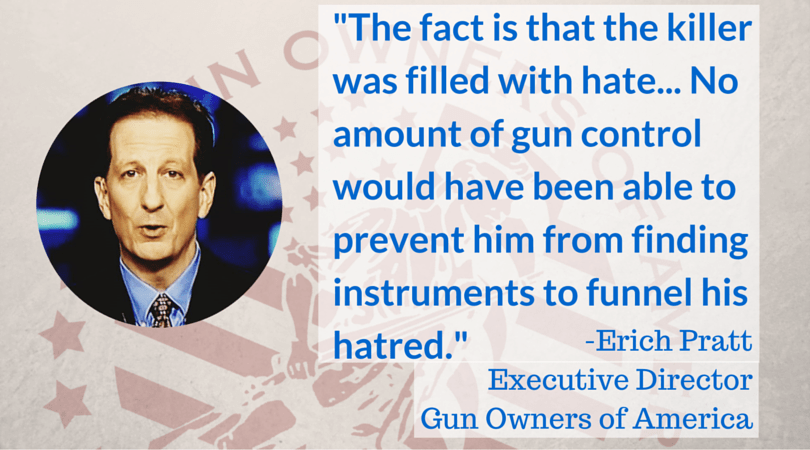 The ACLU is blaming Christians.

How ironic that anti-gun liberals never seem to want to blame the actual perpetrator.

The fact is that the killer was filled with hate.  He pledged his support to ISIS while on the phone with 9-1-1.

No amount of gun control would have been able to prevent him from finding instruments to funnel his hatred.

Gun Control Does Not Stop an Evil Heart

Remember how Julio Gonzalez — using matches and gasoline — killed 87 innocent victims in a Bronx bar in 1990?

It’s a sad reminder that the instruments used in crime — such as matches or AR-15s — are not to blame.

No, people with evil intentions are to blame.

And it’s not, as anti-gun liberals claim, the supposed “easy access” to firearms which is responsible for mass murder.

Hundreds of people were murdered or injured by armed Islamic terrorists in Paris last November, despite the fact that France has far stricter gun control laws.

Kenya also has greater restrictions on firearms, but saw 147 students gunned down at a university last year.

And 50 Chinese were murdered last September in a coal mine — not with guns, but with knives.

Consider that Florida gun owners are not allowed to carry in any establishment that serves alcohol.

And the Orlando murderer passed several background checks — he was a licensed security guard — and bought his guns legally.

He was even investigated, and cleared, by the FBI.

What does work is allowing the potential victims — that is, the real first responders — to defend themselves with firearms.

One year ago this month, a disgruntled man was hoping to inflict severe carnage in a Youngstown bar.

Thankfully, there was a bar employee with a concealed carry permit who shot the gunman several times, killing him.

That’s how you stop mass shooters dead in their tracks.

Here’s What We Can Do Together

GOA spokesmen are busy doing several media shows today — and we will be doing a special Facebook Live appearance tomorrow at 12:30 pm (EST).

If you haven’t “liked” us on Facebook yet, please do so here.

Then you’ll get a notification for our very important live stream.

3. Finally, you can forward them this link to sign up for our Email Alerts.

Our rights are already under attack, and so Gun Owners of America will need to alert as many gun owners as possible to the gun control proposals that are already being hatched behind closed doors in our nation’s capital.

Thank you for standing with us in defense of our freedoms.