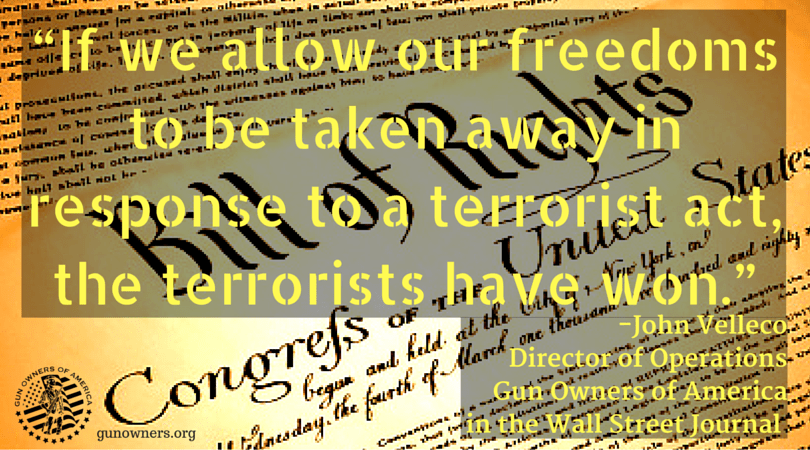 “A person can be put on the no-fly list without knowing it. It is difficult to get off the list once you’re on it and there’s no due process. Now they want to create new laws to impact law-abiding citizens,” John Velleco said.

Sunday’s mass shooting in Orlando, Fla., spurred Democrats to renew a long-stalled effort to tighten access to guns, injecting the polarizing debate into the contests for the White House and Senate.

Senate Democrats on Monday said they would push for a vote again as soon as this week on legislation that would give the Justice Department authority to prevent a known or suspected terrorist from buying firearms or explosives if authorities believe the weapon could be used in connection with terrorism. Someone who meets that criteria is likely to be on one of the federal terrorism watch lists, including the no-fly list.

It isn’t clear that the legislation would have been able to prevent the Orlando shooter, identified by police as Omar S. Mateen, from obtaining the weapons, including an AR-15 semiautomatic rifle, he used to kill 49 people and injure 53 others at a gay nightclub in the deadliest mass shooting in U.S. history.

Senate Democrats said they believed law-enforcement officials under this bill would have had the authority to prevent Mateen from purchasing a gun.

“It’s likely they would have, but we’ll never know,” Sen. Charles Schumer (D., N.Y.) said Monday. “If the FBI believes there’s a reasonable chance someone will use a gun in a terrorist attack, it should be able to block that sale.”

The Federal Bureau of Investigation twice investigated Mateen in 2013 and 2014 over hints of radical leanings before closing those cases as inconclusive. FBI officials said Mateen was on a federal watch list, but was later removed. Had he bought a gun while on the watch list, law-enforcement officials would have been notified.

The measure stalled in the Senate in an almost entirely partisan 45-54 vote in December after the mass shooting in San Bernardino, Calif. One Democrat, Sen. Heidi Heitkamp of North Dakota, opposed the measure, while one Republican, Sen. Mark Kirk of Illinois, supported it.

Suspected Orlando gunman Omar S. Mateen was able to buy several weapons before the attacks, despite the fact that he was known to the FBI. Photo: Zachary Scheffer for The Wall Street Journal

Critics of the legislation said at the time that the terrorism watch lists, including the no-fly list, sweep too broadly and could prevent law-abiding citizens from purchasing a firearm. The federal government maintains several databases of people suspected of links to terrorism, including a no-fly list barring certain individuals from boarding airplanes in the U.S.

John Velleco, Director of Operations at the Gun Owners of America, said the rush to introduce gun-control legislation in response to a terror attack plays into the hands of terrorists.

“If we allow our freedoms to be taken away in response to a terrorist act, the terrorists have won,” he said.

Mr. Velleco said the proposals now being discussed were fraught with problems.

“A person can be put on the no-fly list without knowing it. It is difficult to get off the list once you’re on it and there’s no due process,” he said. “Now they want to create new laws to impact law-abiding citizens.”