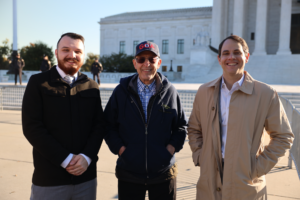 (From left to right) GOA’s Aidan Johnston, Dick Heller, and Philip Reboli outside the Supreme Court during oral arguments

GOA and GOF have been following this landmark case closely. GOA and GOF submitted an amicus brief in support of New York State gun owners and laid out an argument against the state’s gun-grabbing laws.

Currently, if you are a law-abiding citizen, New York State won’t issue you a permit without what they call “proper cause.” This means they can arbitrarily deny your right to carry a gun for protection, even if you have a clean record. Not only is that unconstitutional, but it is also seriously troubling considering the 97% jump in shootings and 45% increase in murders in New York City last year.

This is important given that the attorney challenging New York’s law still felt the need to concede that permits were valid. Our amicus brief says otherwise. There should be no room for the federal government, states, cities, or lower courts to apply “balancing tests” to allow for infringements of the right to keep and bear arms.

In this brief and our multiple other legal efforts, GOA and GOF have upheld our no-compromise position in standing firm with gun owners across the country. As we have seen in cases like these, overly restrictive permitting laws are a slippery slope towards total gun confiscation and an unconstitutional infringement on our property rights.

GOA and GOF will always stand up for our Second Amendment rights and for gun owners, as gun-grabbing politicians and activist judges attempt to implement radical laws that serve no other purpose than gun confiscation.

The good news is that the Justices are reading the amicus briefs—this was evident in today’s oral arguments. We have even seen Justice Clarence Thomas refer to GOA’s briefs in the past.

Not only that, according to the Empirical SCOTUS, GOA is tied for 13th on the list of most effective legal organizations. And GOA was the only firearms organization on this list — outperforming both the AFL-CIO and the NAACP Legal Defense Fund.

Much of our legal effectiveness comes through the almost 150 amicus briefs that both GOA and GOF have filed over the years. For example, in the landmark Heller case, GOA’s amicus brief is recognized as contributing to the “text and history” standard that was articulated by Justice Antonin Scalia. GOA’s brief challenged judicial balancing tests in favor of an originalist approach that examined, as our brief espoused, the “text, context, and history” of the Second Amendment.

Dick Heller himself would later say:

“When the District of Columbia tried to deny me my right to own a handgun, Gun Owners of America fought for me. Thanks to groups like GOA, we won a groundbreaking federal court decision for your gun rights affirming the Second Amendment protects an individual’s right to keep and bear arms.”

In order to continue fighting for our right to keep and bear arms, GOA and GOF ask our members to help support our legal teams and to please consider making a tax deductible donation here. All funds go directly into fighting to restore our Second Amendment.