Gun Owners of America has been fighting against a new form of “red flag” gun confiscation orders in the Violence Against Women Reauthorization Act or VAWA since 2019, when anti-gunners politicized the funding to include gun control. 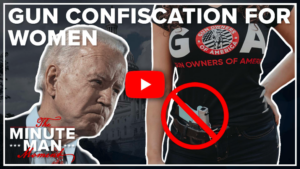 [R]eauthorize the Violence Against Women Act, which—the so-called—close—the “boyfriend” and “stalking” loopholes to keep guns out of the hands of people…

I held over a thousand hours of hearings to pass the Violence Against Women Act… this has been a hobbyhorse of mine for a long time — got it done once.

Later in April, Biden plugged for VAWA during a nationally televised speech to address a joint session of Congress. And Biden was also sure to bring up VAWA’s gun control in June, when he announced a crackdown with his “Gun Crime Prevention Strategy.”

Please, demand your Senators announce their opposition to Biden’s gun control agenda in H.R. 1620, the Violence Against Women Reauthorization Act of 2021.

Of course, the boyfriend loophole is just outright gun control.

In this year’s VAWA:

That is why it is important that freedom-loving men and women take action to oppose H.R. 1620.

GOA alerted you in April with our Minute Man Moment YouTube alert for grassroots activists when the House of Representatives had just passed H.R. 1620 by a vote of 244-172. An outrageous 29 Republicans voted in favor of the bill, despite the gun control provisions.

Now, while GOA has been tracking VAWA’s negotiations in the Senate—where the fight is—compromise between Republicans and Democrats appears to be progressing.

In September, Huddle—Politico’s “play-by-play preview of the day’s congressional news”—reported on the negotiations, saying:

Ernst told Huddle that she sees a path forward for VAWA, including on firearms provisions which have held up negotiations for years. “I think we’ve found a potential solution on that,” she told Huddle, without additional details. “We’re just running the traps,” she said.

We’re near a potential “solution” on all that gun control?

Gun control IS THE TRAP!

Gun owners need to demand that pro-gun Senators hold firm and do not compromise with our rights.

Then, today came the worst news to date.

At a Senate Judiciary hearing entitled Renewing and Strengthening the Violence Against Women Act, a few Senators gave insight into these secret negotiations.

And Senator Durbin revealed that a compromise is within sight when he said:

I look forward to introducing the Violence Against Women Reauthorization Act [Senate Compromise Bill] with Senators Ernst, and Feinstein, [and] many of our colleagues, quickly. We want to move on this. We need to get this bill to a president who is ANXIOUS to receive it as well and sign it into authorization.

For once, Senator Durbin is 100% right. Biden is anxious for a victory amidst his many recent failures. Biden wants a win any way he can get it.

But pro-gun Senators SHOULD NOT be negotiating with our rights, looking for an opportunity to assist Biden with his gun control agenda.

It is urgent that you contact your Senators and let them know that you are opposed to any VAWA reauthorization that includes gun control.

GOA will keep you informed on what’s going on with VAWA moving forward.

Right now, it’s your turn to go out there and defend your rights in the court of public opinion!