Yesterday, a Virginia judge issued a ruling in a case brought by Gun Owners of America and the Virginia Citizens Defense League (VCDL).

While there was some good and bad in the opinion, there were parts that were devastating to Governor Ralph “Blackface” Northam’s position. 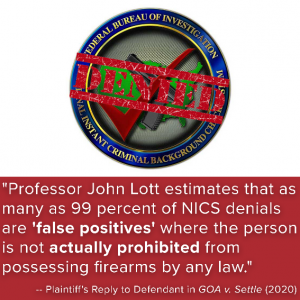 The suit sought a temporary injunction to prevent the newly-enacted Virginia Universal Background Check law from taking effect. While the judge incorrectly ruled that the underlying law does not violate the Virginia Constitution, he did issue a temporary injunction on the enforcement of the law for those 18-20 years old who are purchasing a firearm through a private sale.

That dichotomy could sound confusing, so we’ll explain this below.

But first, the good news. The judge’s opinion provides one of the most comprehensive rejections of balancing tests that we have seen in courts throughout the country. The opinion dismantles the Commonwealth’s legal arguments piece by piece, rejecting the idea that judges can use a “sliding-scale framework” and can jiggle empirical arguments in a way that overrides constitutionally-protected rights.

Then, as mentioned above, the judge issued a statewide injunction which prevents the law from being applied to 18-20-year-olds. This is a historic victory. According to statements made in court by the Solicitor General, no court has ever before issued a temporary injunction to invalidate an act from the General Assembly — that is, until yesterday.

Obviously, we would have wished to see the judge extend the injunction to all private transactions, and we will continue to press ahead with the case. You can read our briefing materials here and here.

To be clear: yesterday’s ruling was on the temporary injunction, and not the merits of the case as a whole. So, this was just the preliminary skirmish in a much bigger war.

Guns & Gadgets did an excellent job summarizing the judge’s decision, which you can view here. 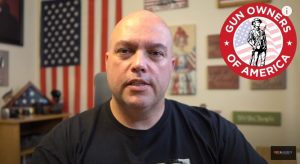 Jared of Guns & Gadgets breaks down the judge’s decision in Virginia, and he helps viewers under-stand why the deck has been stacked against gun owners in regard to background checks.

Why Young Adults are Exempt

GOA and VCDL’s lawyers scored a big victory when it comes to the law’s application to young adults. Our attorneys explained to the judge that Virginia’s law — which is only supposed to impose background checks — is actually a de facto ban on handgun purchases by 18-20 year olds.

Here’s why. A Universal Background Check law bans all private sales which do not first go through an FBI background check that is initiated by an FFL. But under federal law, young adults in the 18-20 age group cannot purchase a handgun from a dealer.

This means that the FBI will NOT approve the transfer of a handgun to anyone 18-20 year old.

This argument weighed heavily upon the judge. And to his credit, he issued a statewide injunction on enforcing background checks for young adults engaging in private sales.

Not surprisingly, the Commonwealth of Virginia has already stated that they will appeal this part of the judge’s decision.

Stay tuned. This battle is not over yet. But we thank you for helping GOA stay active in the courts.