Written by Michael Hammond Published: 02 May 2019

Urge Your Lawmakers to Reject Gun Control in Spending Bill

Please use GOA’s action center to email and/or call your state senator. You can do both with just one click below, after filling in your information. (If you’re uncomfortable giving your phone number, please use your area code followed by 7 random digits.) 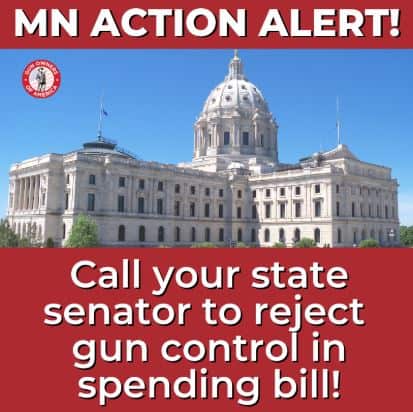 So, not wanting to disappoint their New York overseers, Minnesota House Democrats are now threatening to hold the state safety budget hostage to their Orwellian gun control package.

All session, the Republican Senate had refused to pass the Democrats gun control proposals.

So, in the dead of night, House Democrats tacked Gun Confiscation Orders and Universal Background Checks/Gun Registries onto the state’s comprehensive safety budget.

Under the Democrat extortion scheme, the Democrats would cut off funds intended to keep Minnesotans safe — unless, Republicans agreed to strip state residents of their constitutional rights.

Make no mistake about it: Under the Democrat Gun Confiscation bill, you could be stripped of your Second, Fourth, Fifth, and Fourteenth Amendment rights with no due process whatsoever by a police phone call to a pliant judge.

The first you would learn of it is when the SWAT team arrived at your door in the middle of the night.

So it’s time Senate Republicans stand up to House Democrats extortionists by stripping ALL GUN CONTROL for the comprehensive safety package.

Please contact your senator (above) and urge him or her to oppose Gun Confiscation Orders and Universal Background Checks in the government spending bill!

Help us defeat waiting periods and gun bans in NH!