Hold Cities and Municipalities Financially Responsible for Breaking the Law

The recent actions of the Pittsburgh Mayor and City Council are designed to destroy your Second Amendment rights through violating Pennsylvania’s firearms preemption law. 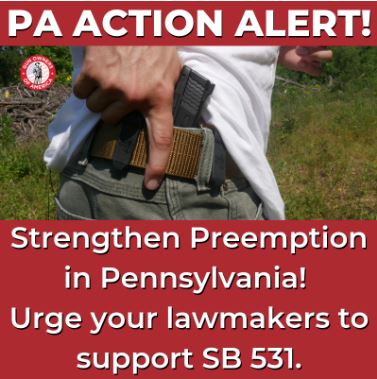 This is part of Pittsburgh Mayor Bill Peduto’s strategy to bankrupt law-abiding citizens who are victimized by these illegal ordinances using tax dollars and outside money provided by Michael Bloomberg and Everytown USA.

And make no mistake about it, Mayor Peduto wants every municipality in Pennsylvania and the United States to make their own gun control ordinances.

He is travelling throughout the country to encourage other cities to attempt similar end-runs around your Constitutional rights.

This bill provides law-abiding citizens the ability to recover damages, reasonable attorney fees, and costs if a court finds that a local ordinance violates the state firearms preemption law (Title 18 §6120).

SB 531 holds elected officials accountable for breaking the law and stops their financial “war of attrition” against law-abiding gun owners.

So please urge your state senator and representative (above) to support “Strengthening Preemption” — SB 531!