A west Kentucky county where a deadly high school shooting last year claimed the lives of two students is considering making the county a “sanctuary” for gun rights. 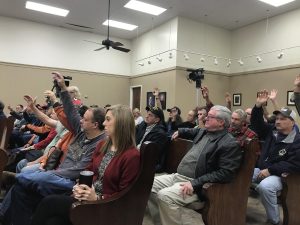 Judge/Executive Kevin Neal asked the crowd for a show of hands of who would be willing to “stand in the gap” in support of gun rights,
CREDIT DALTON YORK / WKMS

The Marshall County Fiscal Court met Tuesday to discuss what’s called a Second Amendment Sanctuary County ordinance, or SASO. The ordinance says that, if enacted, county officials cannot “knowingly and willingly, participate in any way in the enforcement of any Unlawful Act, as defined herein, regarding personal firearms, firearm accessories, or ammunition.”

The proposed ordinance defines an unlawful act as any federal or state regulation or law that “restricts an individual’s constitutional right to keep and bear arms”, or any regulation or law that bans, registers or limits the “lawful use of firearms, firearm accessories, or ammunition (other than a fully automatic firearm which is made unlawful by Federal law).”…

The court heard from a gun rights advocate before discussing the ordinance. Val Finnell is the Pennsylvania director of Gun Owners of America, a gun lobby group. Finnell said the court should act to protect Second Amendment rights.

“I would hope that Marshall County sets the example for what every county in Kentucky should do to protect their citizens from unconstitutional laws,” Finnell said. “May God give you the courage and conviction to stand in the gap.”

Finnell said, as of November, about 240 counties and cities across the country enacted SASO’s. He said Illinois, Colorado, New Mexico and Washington have SASO’s in a majority of their counties.