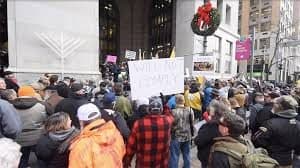 It was in April when gun rights supporters walked into municipal court, hoping to file charges against Pittsburgh Mayor Bill Peduto and City Council members, but their complaints were not accepted.

The legislation signed in April makes it illegal to load, brandish, display, discharge, point or otherwise use an assault weapon within the city.

In the suit, gun rights advocates claim Zappala “breached his duty as chief law enforcement officer” and  refused “further action and gave no written explanation for the said denial.”…