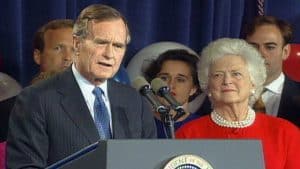 President Donald Trump [is] following in the footsteps of George H. W. Bush, who paid the price for his betrayal.

Following the model of George H. W. Bush, Donald Trump is taking a major step toward becoming a one-term president. Bush thought he could become more popular by betraying his promises to defend the Second Amendment. Trump now feels the same; according to the New York Times, he has ordered his staff to work with Senate Republicans to pass a major gun-control package that would set the stage for gun confiscation.

Let’s remember how gun control worked out for George H. W. Bush. Like Trump, Bush had a long record of supporting some gun control; that record was part of the reason he lost the Texas Senate race in 1970 and the presidential primaries in 1980. Also as with Trump, the campaign that won Bush the presidency was strongly pro–Second Amendment: Shortly before running for president in 1988, Bush joined the NRA. His acceptance speech at the Republican Convention touted his devotion to gun rights. In a September 1988 public letter to the NRA, he promised to oppose gun bans and other forms of gun control.

Bush won the general election in a landslide against the inept Democratic nominee, Michael Dukakis, who as governor of Massachusetts had declared that only the police and military should have guns. Bush’s victory margin was so large that the pro–Second Amendment vote was not essential. Gun voters did, however, amplify Bush’s win by carrying him to victory in states such as Pennsylvania, Montana, and Maryland.

Bush’s campaign promises apparently meant little to him. A few weeks into the Bush presidency, the administration was set back on its heels by the Senate’s rejection of Secretary of Defense John Tower. Some conservative activists had raised concerns that Tower had a drinking problem, and that was the end of the nomination. So the White House cast about for what they thought would be a popular issue, and they chose gun control.

In Stockton, Calif., a seriously mentally ill career criminal had murdered elementary-school children in a schoolyard. If California had had a functional criminal-justice system, the criminal would have been behind bars and receiving mental-health treatment.

Bush denounced what he called “automated attack weapons” — that is, guns with a military appearance. Although the guns looked like machine guns, they functioned differently, with a much slower rate of fire — the same rate as common handguns. But Bush couldn’t be bothered to know the difference between reality and appearance, and neither could many other politicians and the media. The same is true today.

Using administrative authority, Bush banned the import of so-called “assault weapons” — almost all of which actually had well-established use in hunting and target shooting. In the courts, the Bush administration’s lawyers insisted that individuals had no Second Amendment rights. Bush’s Department of Housing and Urban Development urged local public-housing authorities to prohibit tenants from owning firearms in their homes. Bush promoted an early version of what would later become the 1994 Clinton-Biden crime bill, including a ban on many ordinary firearms. The leading Republican supporter was South Carolina senator Strom Thurmond, the longtime segregationist and opponent of civil liberties.

In 1991, Bush soared to 89 percent popularity after winning the First Gulf War against Iraq’s Saddam Hussein. (At the time, few people realized that Bush’s decision to let the tyrant stay in power would set the stage for more terrorism and another war.) Yet Bush had few accomplishments on the domestic side. He had already violated his “read my lips: no new taxes” pledge — and was perhaps surprised to find that the people who hated him before he broke his promise hated him just as much afterwards.

In search of a domestic accomplishment, Bush again proposed a grand bargain: He would sign a crime bill with gun control if the bill would also eliminate the exclusionary rule for firearms seized as evidence. That rule, created by Supreme Court decisions starting in 1914, prevents the courtroom use of evidence that is obtained through illegal police conduct. The Bush proposal would have allowed government agents to break into someone’s home with no warrant, no probable cause, and no exigent circumstances, ransack the home to look for a gun, and then use evidence of the seizure in court against the individual. Too bad for the Fourth Amendment.

Perhaps Bush’s opposition to judicial controls on law-enforcement misconduct was not surprising. Under his administration, federal law-enforcement agencies — including the Bureau of Alcohol, Tobacco, and Firearms — had become notorious for legally unjustifiable and excessive violence, often with deadly consequences for the victims. Then as now, most federal agents were decent people, but the Bush administration from the top down encouraged the recklessly violent ones.

In September 1992, the National Rifle Association declined to endorse Bush for reelection. Instead, the association concentrated its resources on candidates in other races who had kept their promises. Bush lost handily to Arkansas governor Bill Clinton, in part because Bush’s conservative base had realized that while Bush talked like a Texan, he governed like a northeastern aristocrat.

The Clinton administration did everything it could to promote gun control, including winning enactment of a gun ban as part of its 1994 crime bill. (The one that most Democratic presidential candidates today accurately denounce as a disaster for civil rights.)

Clinton’s overreach on guns played a major role in flipping control of the House and Senate in the 1994 elections, electing the most pro-gun Congress since the early 1920s. As this experience showed, it’s better to be under frontal attack from an overt enemy than to be stabbed in the back by a purported ally….

Donald Trump has flirted with the Bush model before, endorsing gun control in a February 2018 meeting with Senators Feinstein and Schumer. But Trump quickly pulled back. Now he seems more determined, apparently believing that the NRA, which is embroiled in internal conflicts and lawsuits over management issues, is too weak to stop him. Like many New Yorkers, Trump does not realize that the NRA itself is a consequence of American gun culture. If the NRA disappeared tomorrow, American gun owners would spontaneously self-organize in defense of their rights. The same is true for the pro-life movement, the environmental movement, and many others. Strike down their national organizations, and thousands of grassroots organizations will arise to take their place.

The same is not true for the anti-gun movement. There has always been a hard core of anti-gun extremists, exemplified by the 20 percent of persons in opinion polls who want to ban all handguns. But the anti-gun grassroots never did spontaneously self-organize to any significant degree. Today, that doesn’t matter, since anti-gunners are now organized by the best professional organizers that money can buy, thanks to Michael Bloomberg and other malefactors of great wealth. This creates the impression among some politicians that the anti-gun movement is larger than ever before, in terms of voting support. This is not true, but the anti-gunners are now much more visible.

Trump imagines that he will win reelection because the other party’s nominee will be so extreme. He should ask Jimmy Carter about that one. In 1980, Ronald Reagan’s ideas were indeed far from the center of gravity of American politics. But the American people were tired of Carter’s weakness, indecisiveness, and incompetence, and by a landslide they decided to give the opposing candidate a chance.

For over three decades I have been in close contact with grassroots gun-rights activists. In 2016 there were a few such activists who genuinely liked Trump; the vast majority viewed him with disgust, based on his character. Yet these same activists worked relentlessly to get gun owners to the polls and thereby carried Trump to narrow victories in Michigan, Wisconsin, and Pennsylvania. If Trump follows through on his plans to betray them, they won’t forgive and they won’t forget.

DAVID B. KOPEL is the research director of the Independence Institute and an adjunct law professor at the University of Denver.