“Red Flag with due process” means, “let’s have a law where people’s guns can be taken away because a judge decides they are likely to commit a crime in the future — even though they haven’t committed any crime yet. And we’ll call it due process because the person gets to know that this is happening and gets to go to court and defend himself against the ‘thought crime‘ charge.” 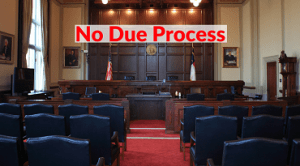 No matter how much procedural due process you add in (i.e., give notice, let the accused have an attorney, hear charges against him, and defend himself in court), red flag laws still lacks substantial due process (i.e. it’s wrong to have guns taken away based on a future prediction).

No person should have to go to court to defend himself against a “thought crime” charge.

If a person is truly determined to be a danger to himself or society (and there had better be a high bar for that — i.e. actual violent crimes committed) — then remove him from society. Take him off the streets. All the tools to do that are already in place.

Simply taking a gun away from a person who is truly dangerous is not going to stop him from carrying out evil plans. And lowering the bar for people’s guns being confiscated (i.e. “take the guns from someone whom we think is going to commit a future crime”) is likely to hurt innocent victims.

With all the criminal justice reform discussion, it should not be difficult for people to understand that minorities will be disproportionately harmed by legislation like red flag laws — no matter how much “due process” you try to include.

This is why we must stop “red flag” law proposals.

Rachel Malone is Texas Director for Gun Owners of America.

GOA to Congress: “Red Flag” Laws Will Not Save Lives