WASHINGTON — Gun Owners of America followed through on promises and filed a lawsuit challenging a Trump administration directive to ban bump stocks in the wake of the Oct. 1, 2017, mass shooting in Las Vegas.

The GOA filed the lawsuit Wednesday in the Western District of Michigan. The district is within the jurisdiction of the 6th Circuit Court of Appeals, which is considered by the pro-gun group to be more friendly to gun ownership and skeptical of government regulatory action. 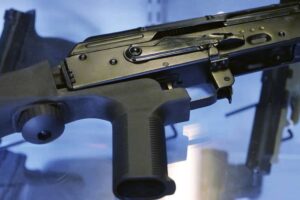 The Bureau of Alcohol, Tobacco, Firearms and Explosives issued a rule change earlier this month that classified bump stocks — devices used to accelerate rate of fire of semi-automatic rifles — as machine guns, which are illegal.

“Our suit will challenge the legality of ATF’s action and ask for an injunction to stop enforcement of the regulations,” Erich Pratt, GOA executive director, said in a statement.

Stephen Paddock, 64, attached bump stocks to 13 semi-automatic rifles that he used Oct. 1, 2017 to kill 58 people and injure more than 800 concertgoers at a country music festival on the Las Vegas Strip.

House and Senate Democrats called for legislation to make bump stocks illegal, while Republicans sided with President Donald Trump to seek a change on how the devices are regulated.

“This challenge does not come as a surprise,” said Rep. Dina Titus, D-Nev., who has filed a bill to outlaw bump stocks.

“If the president actually cared about banning bump stocks he would support our legislation efforts to get this done the right way and avoid this legal limbo,” Titus said.

The ATF directive would ban bump stocks and order those with the devices to destroy or turn them into law enforcement.

GOA’s lawsuit cites the Las Vegas shooting and asserts that Trump was politically pressured to ask the ATF to change its previous ruling that bump stocks were not weapons and therefore not illegal.

“If anyone thought the election of Donald Trump would put the Second Amendment community on ‘Easy Street,’ this apparently will not be the case,” Pratt wrote.

Republicans instead backed an administrative rule change through the ATF, which the National Rifle Association, the largest gun lobby, supported.