Newsweek reported that Gun Owners of America, an activist and lobbying group, filed the lawsuit in Western Michigan against the federal Bureau of Alcohol, Tobacco, Firearms and Explosives as well as acting Director Thomas Brandon, acting Attorney General Matthew Whitaker and the Department of Justice.

“These dangerous regulations can go much farther than just bump stocks,” said Erich Pratt, the group’s executive director. “The goal of the anti-gun left is, ultimately, not just banning bump stocks but rather putting ‘points on the board’ toward its goal of banning civilian ownership of all firearms.” 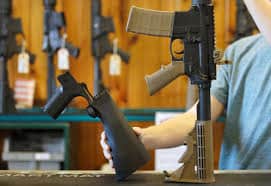 The suit seeks an injunction to prevent the regulation from going into effect, Pratt said. It also describes the ATF’s reclassification of bump stocks as machine guns as an “irrational decision, unsupportable in either law or fact” and accuses Trump of bowing to political pressure.

“ATF’s reclassification of bump stocks as machine guns is a political decision designed to circumvent the legislative process, not a legal one based on any technical evaluation,” the lawsuit reads.

Pratt said the suit was purposefully filed in Western Michigan, within the jurisdiction of what he called the “very pro-gun” Sixth Circuit of Appeals.

In addition to Gun Owners of America, the suit also names other groups and individuals as plaintiffs, including its Texas state director, Rachel Malone, and the Virginia Citizens Defense League.

Trump announced on Dec. 18 that the steps required for issuing the new regulation had been completed, a process spurred by deadly mass shootings in Las Vegas last year and Parkland, Fla., earlier this year.

The measure prohibits bump stock devices and requires anyone possessing the devices to turn them in to the ATF or destroy them within 90 days. The law would go into effect on March 21 of next year after the three-month grace period…