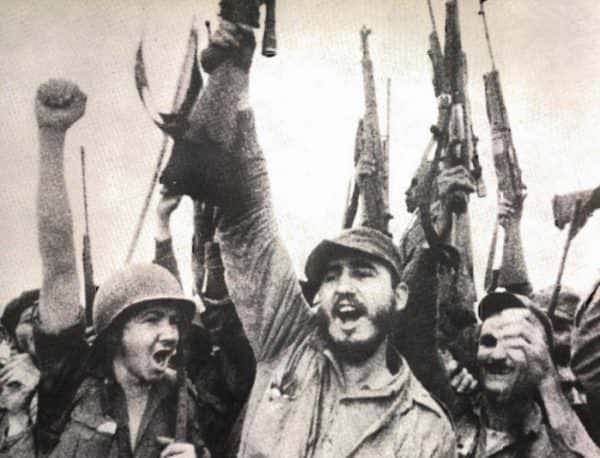 “Castro moved against private gun ownership the second day he was in power. He sent his thugs throughout the island using the gun registry lists — compiled by the preceding Batista regime — to confiscate the people’s firearms.” — GOA’s Larry Pratt

USA – (Ammoland.com)- “Authorized Journalists” are outdoing each other coming up with superlatives for dead Cuban dictator Fidel Castro. Some are comparing him to George Washington, others are calling him a “folk hero,” and all are gushing over the superiority of socialized medicine and centralized communist indoctrination of the young.

The problem is, like so much of the agenda-driven narrative the media feeds the public, Cuban health care ain’t all it’s cracked up to be. Per a National Review summation, they have a three-tiered system, one for rich foreigners, one for party officials, and one for the workers and peasants:

Then there is the real Cuban system, the one that ordinary people must use — and it is wretched. Testimony and documentation on the subject are vast. Hospitals and clinics are crumbling. Conditions are so unsanitary, patients may be better off at home, whatever home is. If they do have to go to the hospital, they must bring their own bedsheets, soap, towels, food, light bulbs — even toilet paper. And basic medications are scarce. In Sicko, even sophisticated medications are plentiful and cheap. In the real Cuba, finding an aspirin can be a chore. And an antibiotic will fetch a fortune on the black market.

Like the self-important provincials they are U.S. media luminaries then wonder why they’re increasingly irrelevant to flyover America as their extreme “progressive” biases become impossible for anyone with open eyes to ignore. That, of course, necessitates further (and wholly transparent) efforts to suppress the truth by calling anything threatening the narrative “fake news.”

Meanwhile, mindful of his role as Prevaricator in Chief, Barack Obama reframed the very real record of the dead tyrant’s evil legacy, referring to it as “the countless ways in which Fidel Castro altered the course of individual lives, families, and of the Cuban nation,” and concluding “History will record and judge the enormous impact of this singular figure on the people and world around him.”

History has already recorded and judged the enormous impact of Marxist totalitarianism, as have Castro’s victims, their survivors, and those who fled his tyranny. Still, in several ways, Obama has a point: History is written by the victors, communists rewrite it to serve their purposes, and those who do not learn from the past are condemned to repeat it.

The media’s infatuation with Castro is hardly new, and at the time he was leading the insurgency against the admittedly tyrannical Batista regime, many were enamored of a romantic, Robin Hood-like image, something he took pains to cultivate until such time as power was his and the need for masks was over. And he didn’t just fool the “liberals.”

GUNS Magazine (full disclosure: I am a field editor for the magazine, writing their monthly “Rights Watch” column) published “Where Castro Gets His Guns” in its March 1959 issue – the report noted Castro had just taken over the country as the issue was going to press. The article appeared to fully buy into distancing him from the communists, and even cited passages from the Declaration of Independence and made favorable comparisons to our own experience at throwing off the yoke of tyranny.

From the editor’s preview:

THE American Revolution was a popular revolution. It differed from more recent types in that there was no mass defection of government troops, no palace coup by military junta. The people formed their own militia, took their own guns to war. The revolution in Cuba (recognized by the U.S. the instant it succeeded) was such a struggle. Few of the military went over to Castro until the last minute. Yet he got guns, and good ones. From where? From the U.S., mostly, just as we in our turn had earlier got guns from France, from the Marquis de LaFayette. The ease with which Castro got guns should serve as a signal to the embers of neo-fascism elsewhere. The story “Where Castro Gets His Guns” is history written today.

As an aside, in an eerie reminder that history repeats itself, author William B. Edwards cited a CIA source admitting the U.S. government secretly allowed half of the guns smuggled to Cuba to get through, and recounted how smuggled Russian and Czech arms were being planted on dead revolutionaries by the Batista government “to discredit the revolution.” Fast and Furious similarities, anyone…?

The Cuban revolution was no American one, and Castro’s embracing of communism after convincing the world he was a freedom fighter should remind all who can think of the “fool me once” adage.

As should Castro’s pointed question when making his case that the people no longer had legitimate need of guns, and that his administration should be the only ones wielding a monopoly of violence:

(GunPolicy.org classifies Cuba’s gun regulation as “restrictive.” Larry Pratt at Gun Owners of America fleshes out how that works in practice, recounting “Castro moved against private gun ownership the second day he was in power. He sent his thugs throughout the island using the gun registry lists — compiled by the preceding Batista regime — to confiscate the people’s firearms.”)

Much to be Thankful for This Holiday Season