Much to be Thankful for This Holiday Season

Much to be Thankful for This holiday Season

“We may then all unite in rendering unto Him our sincere and humble thanks….” — President George Washington, October 3, 1789

Thank You For Helping Safeguard our Rights This Year

It’s been an incredible year — a roller coaster, to be sure.

There have been lots of ups and downs in our fight to safeguard and reclaim our Second Amendment rights.

But we do have a lot to give thanks for.

Our nation just recently celebrated Thanksgiving. And as we head into this extended holiday season, Gun Owners of America wants to THANK YOU for standing with us this year.

I want you to know that your activism and support has made a tremendous difference:

1. GOA Members.  Because of the support of our members, GOA was able to relentlessly pound Hillary Clinton’s anti-gun record in the weeks leading up to the November election.

GOA also educated millions of voters around the country, helping to elect many pro-gun Representatives and Senators in close elections.

2. GOA Activists.  Because of GOA’s grassroots program, activists like you were able to deluge congressional desks with hundreds of thousands of emails and postcards in 2016.

This resulted in more than 150 Representatives and Senators cosponsoring Constitutional Carry reciprocity legislation.

And with the election of Donald Trump, some political pundits believe prospects are good for passing reciprocity legislation in 2017.

All of this is just the tip of the iceberg.

I’ll give you a fuller account next month as part of GOA’s Year-in-Review, when I’ll recount our chief victories from 2016.

Getting Ready to Advance Gun Rights in 2017

This is the time of year when most GOA activists renew their membership, as they get prepared for the new administration and Congress that will be sworn in this coming January. 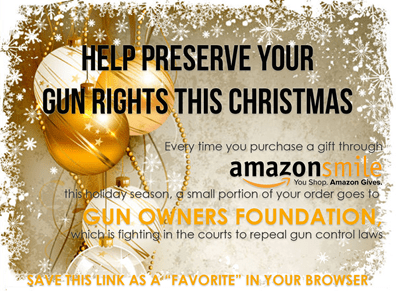 1) Join GOA or renew your membership here. Doing this will ensure you receive legislative-related postcards next year.

2) Amplify your voice by giving a Gift Membership in GOA to your pro-gun family and friends.

3) Support our efforts to defend gun rights in the courts, any time you do Christmas shopping through AmazonSmile by selecting Gun Owners Foundation as the charity of your choice.

I want to personally thank you for all you’ve done this year.

Finally, here are a few interviews that GOA did recently, and I hope you enjoy them:

From all of us here at Gun Owners of America, thank you for helping us stay on the front lines.

P.S.  Thank you for working with Gun Owners of America this year.  We are looking forward to doing even greater things together in 2017, so please make sure that you’ve renewed your GOA membership!