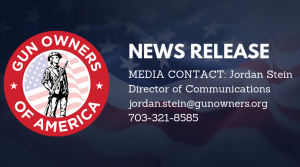 “Kudos to Gov. Kristi Noem for signing GOA-supported legislation that allows citizens to carry concealed without seeking prior permission from the government,” GOA Executive Director Erich Pratt said. “I thank all the GOA activists who spoke up in support of this bill.”

Gun Owners of America mobilized the grassroots in the state in favor of SB 47, with alerts that can be seen here and here.

“This is common-sense gun legislation that will save lives,” Pratt said. “Already, the safest three states in the union are Constitutional Carry states.”

According to FBI statistics for 2017, the states of New Hampshire, North Dakota and Maine have the lowest murder rates. All three are permitless carry states.

Erich Pratt, or another GOA spokesman, is available for interviews. Gun Owners of America is a nonprofit lobbying organization dedicated to protecting the right to keep and bear arms without compromise. GOA represents over 2 million members and activists. For more information, visit GOA’s Newsroom.

3 things you can do to protect the Second Amendment