William Barr Doubles Down in his Support for Gun Control

Click on the Take Action button to urge your Senators to oppose William Barr for Attorney General. And then call them at 202-224-3121.

Urge Your Senators to Oppose William Barr for Attorney General

The Senate Judiciary Committee is expected to vote next week on the Attorney General nominee William Barr.

Unfortunately, Barr’s answers to Senators’ questions during a hearing earlier this month showed that he holds a very anti-gun bias.

And after the hearing, several Senators submitted written questions to him — looking for clarification on many issues (including guns). 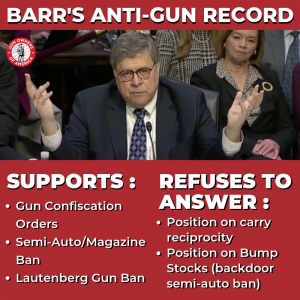 Sadly, Barr either doubled down in his support for gun control or refused to answer important questions — such as whether he supports concealed carry reciprocity.

So it’s now doubly clear that Barr will be no friend to gun owners should he assume the office of Attorney General.

Here are just some of Barr’s answers in writing:

So there you have it.  Barr is not backing down. He would be a disaster for the Second Amendment.

Again, the Senate Judiciary Committee will be voting next week on his nomination.

It is likely that most Democrats will oppose him. But many Republican Senators are wary of going against Trump on this nomination.

So the only hope of swaying them is to convince them that YOU — their constituent — pick up the phone and let them know that you are 100% opposed to this nomination.

Please contact your Senators to urge them to oppose William Barr for Attorney General.

P.S. It’s getting down to “crunch time.” Please take action and then forward this alert to your pro-gun friends and family.  And if you’ve let your membership lapse, make sure to renew your membership in Gun Owners of America today for only $20!