Urge your state lawmakers to reject the gun control package! 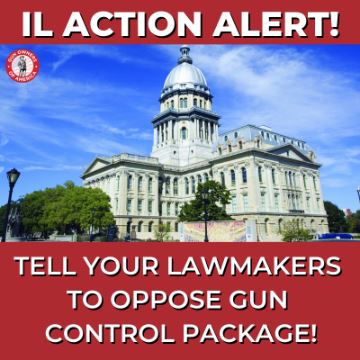 Not surprisingly, Chicago is still a very dangerous city.

So, like a dog returning to its own vomit, Springfield legislators are falling over themselves to find something so fascist — so repressive — that they haven’t enacted yet.

These are some of their bills:

This bill would outlaw virtually all of the most popular semi-automatic rifles in America, retroactively, 300 days after enactment. It would also ban semi-automatic handguns, many shotguns, and components. The only major exception is if you register your gun with the state — and never transfer it to anyone within the state of Illinois. Our experience with states which register semi-automatics is that they soon after ban the guns — and that the registry provides the state with a handy tool for confiscating them.

This bill would require the state police to conduct a search of all your social media accounts prior to issuing a FOID Card — or as a condition of letting you keep it.

This bill would arbitrarily ban every gun component not made of metal (or otherwise “undetectable” by current technology) — without clearly laying out what a “major” component is. Certainly, many commonly owned firearms would be newly banned.

This bill would revoke the FOID Card of any owner who suffers three gun loses in a 2-year period. Who’s most likely to be victimized by this bill? Certainly, large FFL’s, but also minorities living in crime-ridden communities.

No matter your lawmaker’s views on guns, they need to hear from you. They need to know that gun owners will not quietly accept these infringements on the Second Amendment!

P.S. Please urge your state lawmakers to OPPOSE gun control! And if you’ve let your membership lapse, make sure to renew your membership in Gun Owners of America today for only $20!

William Barr Doubles Down in his Support for Gun Control